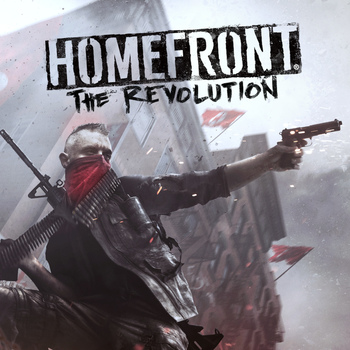 Homefront: The Revolution is a Continuity Reboot to the 2011 videogame Homefront. It is 2029, four years into the Korean invasion of the United States, Philadelphia is under occupation by the KPA. The new Philadelphia is a heavily policed and oppressed environment, with civilians living in fear as the KPA patrol multiple districts in the city. In the city, a second rebellion is brewing and the resistance grows stronger. The story follows Ethan Brady, a young resistance members as he and the new resistance attempt to retake Philadelphia.

The Revolution is a retcon of the original Homefront in regarding to the universe's backstory, but follows the same premise. Originally developed by Crytek, the production was affected by financial issues until the game was eventually sold to Dambuster Studios and published by Deep Silver.

Homefront: The Revolution provides examples of: