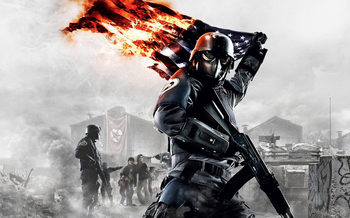 "Today, the Greater Korean Republic launched their latest communication satellite, claiming it will bring a message of peace to the entire world..."
"Home is where the war is."
Advertisement:

Homefront is a 2011 game developed by Kaos Studios and published by THQ.

The game is set in an occupied USA in 2027, where the entire free-market world has more-or-less gone to hell. The USA and China have collapsed in on themselves like disused flans in cupboards in the years after 2012. In the USA, the economic collapse served to promote great social unrest verging on but never quite spilling over into civil warnote  think the The Great Depression times a hundred. A rejuvenated Democratic People's Republic of Korea under the leadership of Kim Jong-un (son of Kim Jong-Il) quickly seized the day. Within the space of two decades of annexation and gunboat diplomacy, all of Asia except subcontinental India and China answers to the Government of the Greater Korean Republic.note Though The European Union seems to be doing fine.

Looking to secure further resources in support of their domestic industries, Korean High Command determines the Americas to be the best option - the obsolescent US military is much weaker and the country's internal problems are far greater than either China's or India's, and the country is far more sparsely populated and resource-rich to boot. In 2025 the GKR detonates a high-yield nuclear weapon deployed from orbit over North America, the EMP killing electronics across 75% of the continent (bordering areas of Mexico and Canada are affected, but generally ignored). This is followed up by an invasion and occupation of the Pacific Coast of the USA and the securing of strategic sites further inland for resource extraction. The politicians in Washington finally stop bickering as they realize that the situation is truly beyond their control. With the partial invasion well underway and the remnants of the central government and military in total disarray, the USA has effectively been dissolved overnight. Everyone west of the now-irradiated — another Communist-Korean dick move— Mississippi River find themselves living under Korean Quislings, in crazed survivalist enclaves or in total anarchy - and it's not quite clear which of those options is worse.

You are put in the shoes of former Marine pilot Robert Jacobs, a man the occupying power is very interested in employing, forcefully if necessary. Fortunately for Jacobs, he is liberated when his prisoner convoy is hit by the local resistance chapter, who needs his piloting skills for a dangerous mission, that, if successful, could help the struggling remnants of the American military retake San Francisco.

The game itself is a First-Person Shooter, similar in gameplay to the Call of Duty: Modern Warfare series. Like the Call of Duty series, the single-player campaign makes heavy use of scripting, and most levels involve the player following and taking orders from a small squad of fellow resistance fighters. The multiplayer is notable for featuring dedicated servers, with gameplay similar to the studio's previous release, Frontlines: Fuel of War.

After the game came out, Kaos Studios released several DLC packs, before being shut down by THQ. Crytek, responsible for the Crysis series of games, picked the rights up. For the longest time, it seemed like the franchise was dead (Not helping was the general reception- while the game was praised for trying to do something different with the story and the multiplayer was well received, the gameplay was criticised for being similar to Modern Warfare, the campaign was pitifully short, and some players criticised the execution of the plot), before Crytek announced a sequel, with a gameplay premiere set for E3 2014. In Homefront: The Revolution, you play as a counter-totalitarianist, using Guerrilla tactics to fight back the invading Korean Republic in the heart of where the USA began - Philadelphia, Pennsylvania.

Homefront: The Voice of Freedom provides examples of: