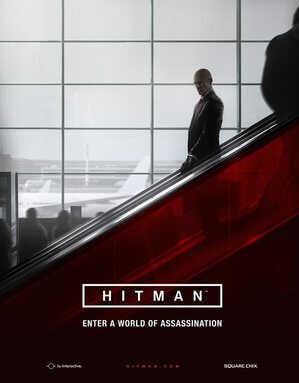 Oh... he's heading there.
"You were always the best. Nobody ever came close. You define the art and it defines you. Your actions have changed the world. Powerful men have fallen by your hand. But by the same token, others have risen. Do you realize what kind of world you've been shaping?"

Hitman (stylized as HITMAN) is the sixth game of the Hitman series by IO Interactive, and is the first entry into the "World of Assassination" Trilogy. It was released in 2016, and is often called Hitman (2016) as a result by pretty much everyone (Including this very wiki for page disambiguation purposes) to differentiate it from the first game.

The plot takes place after the events of Absolution and returns to the formula of 47 going around the world performing hits on high-profile targets.

The game took an episodic approach, with the episodes releasing roughly monthly, each one containing a single mission, a few escalations, and a new map. The game has finished its first (and only) season, with HITMAN 2 being announced as a direct sequel to this game, rather than a new season. The episodes released included two prequel tutorial missions set during 47's induction to the agency and six proper missions set at a fashion show in Paris, France; a private villa in the fictional town of Sapienza, Italy; a busy market in Marrakesh, Morocco; a hotel outside of Bangkok, Thailand; a remote farm in Colorado, USA; and a luxury private hospital in Hokkaido, Japan. The game also comes with Bonus Missions for Sapienza, Marrakesh and Paris note Landslide and The Icon for Sapienza, A House Built on Sand for Marrakesh and Holiday Hoarders, a free Christmas Special for Paris. The complete game was launched on physical disks on January 31st 2017 for PS4 and PC. The game saw a digital release for Linux on February 16th, 2017note  It was released on the 47th day of 2017, get it?, with a macOS port releasing later in the year, June 20th, 2017, both of which are published by Feral Interactive

This is where things get a little bit complicated. Square Enix declared that the game wasn't making them enough money, and cut its ties with IO Interactive on May 2017. Despite this, IO interactive managed to turn into an independent studio, and surprisingly, kept the rights to the franchise, something which is legitimately quite unheard of when dealing with bigger publishers like Square Enix (who tend to retain the IP, not the developers who made said IP). The first release of the now independent IO Interactive was on October 24th 2017, when they announced the Game Of The Year edition

, which includes all the existing content and some new treats; A new campaign; "Patient Zero", where 47 races against time to prevent a virus from spreading in modified versions of some of the existing levelsnote Bangkok, Hokkaido, Colorado and, of course, Sapienza...again, 3 new outfits (including the Clown outfit from Blood Money!), three new weapons to go with the outfits, and new escalations designed for said outfits and weapons. It costs 60$ to new players, while those who already owned everything can upgrade to the GOTY version for 20$. Alongside the GOTY edition's release, the game received a free update that improved things such as menus and skyboxes, and the Elusive targets make a return and were rerun for those who missed them the first time around. While those who've already beaten or failed them cannot replay them, those who did received a unique coin variant for participating in the original run.

After IO Interactive became independent, they released a comic series on November 4th, 2017, titled Agent 47: Birth of the Hitman, a prequel comic series to the entire franchise which had Diana struggling to cope with the loss of her parents, and 47 finding out about himself and the world, while doing odd-jobs for clients and taking down "The Institute". The comic ran for six issues, and ended in July 2018, a few months before HITMAN 2 came out.

, which bundles the above-mentioned GOTY edition in, along with the Blood Money Requiem DLC, as well as adding in 3 new suits based off of IO Interactive Franchises; the Freedom Phantom suit, the Lynch suit, and the Futo suit. The suits are console-exclusive in this game, but IOI added them in games' sequel on July 30th, 2019, so long as you're willing to sign up for an IOI account.

New features and improvements available in the game:

The sequel, simply titled; HITMAN 2, was released on November 13th 2018note 48 days from the end of 2018, with IO Interactive now having Warner Bros. as their publisher. On a related note, this entire game is available in Hitman 2 as DLC, named the "Hitman 2 Legacy Pack", which was available since launch day, with Season 1/ GOTY edition owners getting the DLC for free, which incorporates the new features of Hitman 2 into the first games' levels. A second sequel, Hitman 3, will be released in January 2021.

As mentioned at the start, if you're looking for the first game in the Hitman franchise, click here instead.

Tutorial Missions
A flashback to "better days", we see how 47 trains to become the best assassin in the world under ICA watch.
Paris: "The Showstopper"
47 heads to the Sanguine fashion show held at the Palais de Wawelska in Paris in order to assassinate Dalia Margolis, former Israeli spy turned model, and her lover Viktor Novikov, former Russian oligarch turned designer. While the two are posing as big names in the fashion world, they are in reality the heads of IAGO, one of the world's largest spy rings, and must be eliminated following their leak of a list of several MI6 agents undercover in the Middle East.
Sapienza: "World of Tomorrow"
The Ether Corporation is developing a weapon that could make all assassination irrelevant—a bioweapon that targets a person's genetic code, allowing it to be dispersed into a crowd relatively easily. They are developing it at the villa of genius scientist Silvio Caruso in Sapienza, Italy, and 47 has been contracted to kill him. He also has two more targets: Francesca de Santis, one of the head scientists on the project and the one who would likely be able to finish the job if Caruso was eliminated, and the virus itself.
Marrakesh: "A Gilded Cage"
47 heads to Morocco to kill Claus Strandberg, a Swedish banker who stole millions of dollars from the Moroccan people and is now hiding in the Swedish consulate at Marrakesh, as well as General Reza Zaydan, who is currently planning on staging a coup while assisting Strandberg's escape.
Bangkok: "Club 27"
Jordan Cross is one of the most popular musicians in the world, in no part thanks to a recent scandal involving his accidental murder of his on-again-off-again girlfriend Hannah Highmoore, whose family has contracted the ICA to assassinate him, as well as Ken Morgan, the Cross family's crooked lawyer who has helped Jordan through the Highmoore scandal. The targets are currently staying at the opulent Himmapan Hotel in Bangkok, which is owned by Jordan's media mogul father Thomas.
Colorado: "Freedom Fighters"
Having discovered the existence of the "Shadow Client", the ICA manages to track down one of his cells in Colorado, and sends 47 over to investigate. While there, he must also kill four of the Shadow Client's top lieutenants: Sean Rose, notorious Australian ecoterrorist the ICA believes to be the Shadow Client; Ezra Berg, Israeli interrogations expert; Maya Parvati, former Tamil Tiger turned pirate turned terrorist; and Penelope Graves, former Interpol agent.
Hokkaido: "Situs Inversus"
Having discovered that Erich Soders is a Providence mole, the ICA decides to get rid of him. However, he is currently staying at the high-tech GAMA hospital in Hokkaido, which is heavily guarded and nigh-impossible for the ICA to infiltrate. The result is that 47 must go in with absolutely nothing, and must find a way to conduct the hit. He is also tasked with killing Yuki Yamazaki, a lawyer with ties to the yakuza and Providence.

Sapienza: "The Icon"
47 has been sent to Sapienza, Italy to eliminate Dino Bosco, washed-out actor-director currently filming the live-action adaptation of the comic book The Icon, at the request of his own company, L'Avventura Pictures, as his perfectionism is driving the company bankrupt.
Marrakesh: "A House Built on Sand"
47 has been sent to Marrakesh to eliminate construction magnate Kong Tuo-Kwang, and Hamilton-Lowe's chief designer-turned-mole Mattheiu Mendola, who intends on trading non-disclosabe company documents to Tuo-Kwang.
Sapienza: "Landslide"
47 has been sent to Sapienza to eliminate Marco Abiatti, a far-right Sleazy Politician and thug intending to run for mayor, at the request of bio-engineer Silvio Caruso, who sees him as a threat to Italy.
Paris: "Holiday Hoarders"
47 has to take out Harry "Smokey" Bagnato and Marv "Slick" Gonif in the Palais De Waleska in Paris, France. A free bonus mission, partially created in support of the World Cancer Research Fund, with IOI encouraging players to donate to the cause. It was made a permanent mission in this game, and initially a temporary mission in the sequel, with it being made permanent on December 17th, 2019.

Specific To The Patient Zero Campaign
Bangkok: "The Source"
The ICA contracts Agent 47 to dismantle a death cult plans for bio-terrorism, contracted by a reclusive millionaire going under the codename "Locksley". Locksley provides evidence that the cult, named "Liberation", is going to attempt to use a bio-weapon in Bangkok. Naturally, you have to put a stop to it by killing its leader, Oybek Nabazov, and his second-in-command, Sister Yulduz, at the Himmapan Hotel, where they are presenting an art exhibition as subterfuge. Hopefully, the consequences of this contract won't have ripple effects... right?
"This vodka is highly flammable and should be kept away from open fire. Should you accidentally apply the vodka somewhere on your body, like, lets say you hands for instance, rinse immediately with water, and do not under any circumstances try to perform fire rituals or the like."
Sapienza: "The Author"
...yeah, about that. Turns out eliminating Nabazov activated a ring of sleeper agents around the world. This leads 47 to Sapienza in hunt of two such sleeper agents: Craig Black, writer of the Cassandra Snow novels, as well as Brother Akram, a Liberation operative who carries the virus that Black wants to unleash onto his audience in Sapienza.
Colorado: "The Vector"
The ICA has managed to find the exact coordinates of the Dead Man's Switch Nabazov activated upon his death, and it leads 47 to a paramilitary compound in the middle of Colorado, where he is tasked with killing Bradley Paine, a doctor and sleeper agent of Nabazov, as well as any infected mercenaries on the compound, in order to stop the spread of the virus.
Hokkaido: "Patient Zero"
The ICA intercepts the memo that Owen Cage, a Liberation operative who has infected himself with the Nabazov Virus with the intention of being its Patient Zero, has been arrested at an airport en route to Sydney, spotted by nervous passersby seeing him doing cult rituals. As he was already succumbing to the Virus, he has been sent to GAMA Hospital in Hokkaido for treatment. 47 is then sent to eliminate Cage, as well as Klaus Lieblied, an Ether Corp. doctor sent to extract samples from Cage before he dies, in order for Ether to reverse-engineer it, spread the virus, then make a profit selling the cure. There's also a complication: If anyone on-site get's infected, you must kill them lest the virus spreads outside of the hospital grounds, and the whole world get's infected. Because of this, Diana and everyone at the ICA has allowed all infected people to be permissible targets for this mission, given what's at stake.