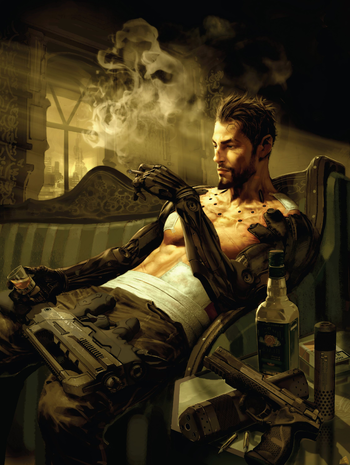 High tech. Low Life.
"Transhumanism is about how technology will eventually help us overcome the problems that have, up until now, been endemic to human nature. Cyberpunk is about how technology won't."
— Stephen Lea Sheppard of RPG.Net, on the relation between transhumanism and cyberpunknote Although he's since gone on record as regretting that quote

The originator of the "Punk" genres, Cyberpunk is a Speculative Fiction genre centered around the transformative effects of advanced science, information technology, computers and networks ("cyber") coupled with a breakdown or radical change in the social order ("punk"). A genre that is dark and cynical in tone, it borrows elements from Film Noir, hard-boiled Detective Fiction and postmodern deconstruction to describe the Dystopian side of an electronic society. It is often used as a synonym to the related trope "Techno Dystopia".

The plot will more than likely take place 20 Minutes into the Future in some City Noir, Industrial Ghetto or Crapsack World that tends to be marked by crime, cultural nihilism and bad weather, where cutting-edge technology is abused by everyone for the sake of selfish profit and pleasure. ("The street finds its own uses for things.") There is a very good chance it will take place in New Neo City.

Heroes are often computer hackers or rebels, antiheroes almost to a man. These characters — "criminals, outcasts, visionaries, dissenters and misfits" — call to mind the private eye of detective fiction. This emphasis on the misfits and the malcontents is the "punk" component of cyberpunk. On the other hand, major villains are almost inevitably Police States or multinational conglomerates led by powerful businessmen with a number of gun-toting Mooks and corrupt politicians (or even an entire nation) at their beck and call.

If the work dates from The '80s, there's a good chance that there will be a theme of East Asian economic dominance, with the evil corporations being sinister Zaibatsu (possibly collaborating with or even run by the Yakuza) and Asian-sounding advertisements, consumer products, brand-names and anime influences liberally scattered around. Since the Turn of the Millennium, it's become commonplace to swap out the Japanese influences for Chinese — though, given the impact that this era had on the genre as a whole, a retro-style Japanese aesthetic isn't uncommon even today.

Expect the scientific philosophy of transhumanism to be a feature, what with Artificial Limbs and cable jacks in the skull that allow access to artificial realities. Artificial intelligences and artificial humans (sometimes corrupted) are everywhere, while Everything Is Online. This leads to a theme of "loss of distinction between real and artificial" on which philosophical and existential conflicts about transhumanism can arise, such as questions on the nature of identity and "What Measure Is a Non-Human?"

The genre's vision of a troubled future is often called the antithesis of the generally utopian visions of the future popular in the 1940s and 1950s, but keep in mind that it is not a term that should be applied to every Speculative Fiction dystopia or Bad Future ever in the history of the genre, and does not need to always have an anvilicious Science Is Bad message to it.

Cyberpunk tends to be pretty hard science fictions, usually lingering between a 4 and a 5. This makes it one of the more realistic genres of sci-fi, but also makes older stories be very prone to Zeerust. William Gibson himself, considered the godfather of the Cyberpunk genre, has said that he was massively shortsighted on the advances in technology that would occur over the next three decades. The infamous "three megabytes of hot RAM" in Neuromancer are laugh-inducing to a modern audience who consider eight gigabytes of RAM cheap and low-end — and even moreso to mid-2010's audiences who've already eschewed outdated MP3 players in lieu of smartphones that now integrate music playback features into their core systems, along with hundreds of gigabytes (of hard storage, with RAM "merely" in the 32gb range) now considered routine. Technology marches on, indeed.

Cyberpunk is also quite distinctive in its focus on Social stories in Asimov's Three Kinds of Science Fiction. It certainly has Gadget and Adventure stories within the genre as well, numerous in fact, but Cyberpunk is a genre that focuses heavily on the impact of technology on society itself, possibly more than any other genre of sci-fi. Given that it's a more cynical genre than others, it particularly focuses on the negative impact of technology on society, but with the emergence of Post-Cyberpunk, portrayal of societal impact of technology has become more neutral and sometimes even positive. It's hard to condemn speculative technology when it becomes actual technology and we realize that, hey — it's not all bad.

This being said, cyberpunk has also seen a general increase in popularity and interest in The New '10s and into The New Twenties, especially toward the former decade's back half. This was spurred on in part by many older, influential works in the genre getting new releases that brought them back into mainstream attention (such as Shadowrun Returns and Cyberpunk 2077), but also the ever-evolving sociopolitical environment; some people feel that a lot of the genre's predictions about how society would change with technological progress have proven to be eerily accurate, and a surprising number of social issues that early cyberpunk stories grappled with are very much still topical in modern times, prompting re-examinations of the movement that questioned whether it was truly outdated and what it still had to say.

As a movement, it was the successor in some sense to the New Wave Science Fiction movement of the sixties and seventies. Related to Cyberpunk for Flavor, Post-Cyberpunk, and Cybergoth. Of course, several works fit on a continuum between these tropes. See also Cyberspace, Dungeon Punk, Punk Punk. Compare also with Steampunk, which shares some similarities with cyberpunk, and Techno Dystopia, which can have overlap on the futurism side. See also Afrofuturism. For the Tabletop game series of the same name, check out Cyberpunk.