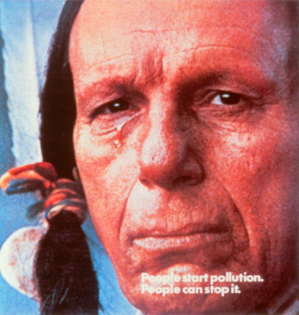 People start pollution. People can stop it.
"Somewhere, an Indian is crying."
Advertisement:

In 1971, the Keep America Beautiful

organization aired a famous TV commercial of a Native American shedding a Single Tear at the sight of litter being dropped on the road (in a follow-up ad, the Indian rides with a big smile through towns where people are cleaning up).

It's known as the "Crying Indian" ad, although it is called "People Start Pollution, People Can Stop It". At the time this was quite a powerful ad with an Anvilicious statement.

But these days, with the overuse of the Magical Native American trope (not to mention that the actor portraying him was Italian-American), this ad has become a Stock Parody. Thus while some still believe in the message, it's hard to resist a good joke from it.

For obvious reasons, this is exclusively an American trope, as the original ads were never used outside the States.

You can find videos online, of course.