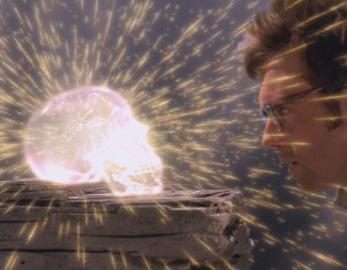 By the power of this skull!

In the 20th century, skulls made of crystal were showing up, with people claiming to have discovered them, and that they had Mayan or Aztec origins, and were said to have supernatural powers. Well, it's likely these were hoaxes. Not only were no skulls examined found in a documented excavation, all were dated from no earlier than the 19th century, and there are no authentic Native American or early modern colonial sources that describe anything analogous.

But fiction follows Rule of Cool, and the supernatural powers attributed to these skulls are plenty for shows.

Also, despite the skulls actually being made of crystal, works of fiction often depict them as skulls that are simply Gem-Encrusted.

A Sub-Trope of Public Domain Artifact. Compare Ring of Power, Mask of Power, Flaming Skulls, Crystal Ball, Silver Has Mystic Powers. Not to be confused with By the Power of Grayskull!.