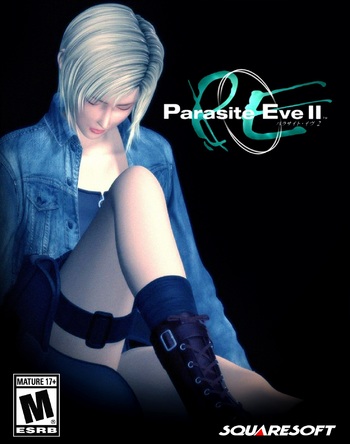 Those A.N.M.Cs in the Akropolis weren’t just escaping the shelter. It was a little demonstration... like they were saying: “Hello, we’re baaaack.”
— Kyle Madigan
Advertisement:

A sequel to Parasite Eve (which was itself a sequel to the novel of the same name), also appearing on the PlayStation. This game features an interface closer to Resident Evil, being more of a Survival Horror game with RPG Elements than vice-versa like the first game.

It is September 2000, almost three years after the New York incident. Since that time, Aya Brea has left the NYPD and joined the FBI's Mitochondrial Investigation and Suppression Team in Los Angeles, an organization dedicated to destroying the mutants dubbed "Neo-Mitochondrial Creatures" (NMCs) spawned in the wake of Eve's rampage. On Sept. 4, the Akropolis Tower in downtown LA comes under massive attack by NMCs, and Aya is sent in to support the Los Angeles Police Department as they move to secure the building, only to find a larger conspiracy brewing that leads to the isolated desert town of Dryfield, Nevada...

It has a sequel on the Playstation Portable titled The 3rd Birthday.

It can also be found on the PlayStation Network.