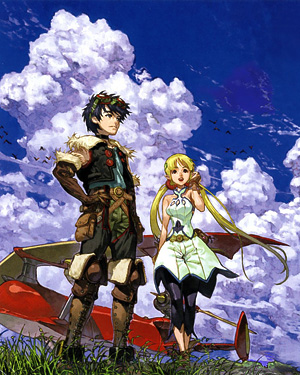 "All you've got to do is break through, to make your wishes all come true! AMAZING"
Advertisement:

Grandia III is so far the last game in the Grandia series. Another world saving and globe trotting adventure, but this game introduces a bit more Magitek, especially old fashioned planes.

Yuuki, an amateur mechanic and pilot, idolises the famous Sky Captain Schmidt and dreams of replicating his achievement of crossing the ocean on a plane of his own design. When his latest attempt begins to fail mid-flight (due to the unwitting sabotage of his mother Miranda), Yuuki happens to notice a young girl named Alfina being chased by Bad Guys. Being the JRPG protagonist that he is, Yuuki immediately goes to save her.

Alfina is one of the last surviving members of an ancient tribe capable of communing with the god-like Sacred Beasts which protect the planet. With very little prompting, Yuuki decides to join Alfina on her search for her missing big brother Emelious, who was last seen with some incredibly suspicious characters.

Released on the PlayStation 2, and also published by Square Enix, but still developed by Game Arts. It should be noted that this game was rushed through its development, and it shows.