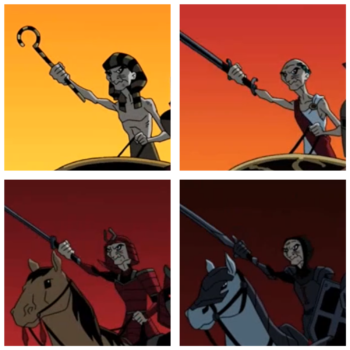 "He knows the strategy of every battle in history, because he was there to see it."
Odin: We are not gods! We're born, we live, we die, just as humans do.
Loki: Give or take five thousand years.
— Thor: The Dark World
Advertisement:

Someone or something that lives for a long time. This often varies from a "mere" 150 years of life to several thousand, although it's not unheard of for them to live longer than that. This is usually achieved either through personal enhancement or naturally being long-lived, in which case they often belong to a species or race that's long lived as well.

Humanity is often portrayed as having a low-end version of this in Sci-Fi works, usually because We Will Have Perfect Health in the Future. It's Truth in Television if we compare our normal lifespans to humans of the past. note Though the notion that people routinely keeled over in their twenties to forties in ye olden days is a myth. While infant and childhood mortality was ghastly, if you made it into adulthood, you generally stood a decent chance of making it into your sixties or seventies. Just look at the birth and death dates on old cemetery headstones. Written millenia ago, Psalm 90 describes the typical human lifespan as 70 to 80 years.

Wizards often benefit from this. Most Elves have this as well, along with Dwarves to a lesser extent. In fact, just about every supernatural creature exhibits this if they're not outright immortal.

See Really 700 Years Old, for when these characters look younger than their age. On the other hand, if they still keep getting older-looking and more decrepit as they age past "normal old age" and into "Methuselah is jealous", they may have Age Without Youth. Also compare The Ageless, for when the character in question doesn't die of old age. When a long-lived race ages at an equivalently slower pace, they may be subject to Proportional Aging.

When adding examples, please remember that the character is only long lived and not immortal.