Just For Fun / Abusing the Kardashev Scale for Fun and Profit 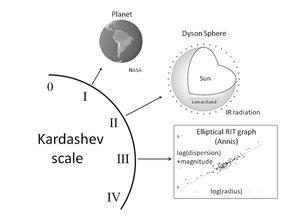 How advanced are you?
"Your race hasn't even reached Type 1 on the Kardashev scale. It doesn't control the resources of this one planet, let alone a solar system or a galaxy. The Time Lords were the Type 4 civilization. We had no equals. We controlled the fundamental forces of the entire universe. Nothing could communicate with us on our level. Most races pray to lesser beings than the Time Lords."
— Time Lord Marnal, Doctor Who: The Gallifrey Chronicles
Advertisement:

The idea of Technology Levels has some actual reference in the real world in the form of the Kardashev Scale,

which indicates how much power a civilization uses. This was originally used in the context of astrobiology, speculating about what advanced alien civilizations might look like from afar, particularly the implications of enormous energy demands. It has since been used to compare the Power Levels of fictional civilizations and, sometimes, individuals.

Note that the Kardashev number of a civilization indicates only its power use; it is at best just a proxy for the scale of technological capabilities at play. Keep this in mind when placing examples, and try to include some explanation. After all, one hallmark of improving technology is increased efficiency, which would actually lower a civilization's Kardashev rating, all else being equal.

Also note that while it may be referenced by popular scientists in mass media (because it sounds cool and is intuitively easy for people to understand), the Kardashev Scale is not a scientifically rigorous concept. Instead it is similar to the Three Laws of Robotics: it is a scale informally conceived as one way you could possibly measure a civilization's technological advancement. However, it is not particularly useful for making predictions in the real world with regard to human civilization, much less any alien ones.

A bit on numbering. Kardashev himself only outlined discrete numbers for levels I, II, and III, with power values corresponding to 1964 humanity, the Sun, and the Milky Way respectively. Later discussions of the topic have generally fixed the value of a Type I power level as that of the Earth's insolation. Carl Sagan proposed a revised scale based on a logarithmic formula

rather than the specific values of celestial objects. It might be less intuitive, but it allows easy interpolation and extrapolation, with a .1 difference representing a 10x difference in power. Extensions to the scale above Type III are not universally agreed upon, so Sagan's formula is used for the purposes of categorizing things in this article, with various real phenomena listed for scale in the appropriate subcategories. Don't expect references to the Kardashev Scale in fiction to necessarily correspond to this formulation, as the page quote implies.

has been done to look for Type IIIs in the local Universe using the WISE infrared telescope, as they're expected to produce large amounts of infrared emissions. Its results

show that those civilizations are very rare or non-existent in our cosmic neighborhood.note The anomalous objects include besides ninety poorly studied objects, that may actually be galaxies making stars galore, five spiral galaxies with very low star formation but unusually high IR luminosities instead of the low luminosity on the infrared a galaxy of that type would have. There is another study,

suggesting that finding Yotta-eV (1024 electron Volt) neutrinos could be proof of at least a type 3 civilization, as that would require using a quasar (a VERY energetic galaxy) as a particle accelerator. For comparison, nuclear bomb reactions release a measly 106 eV per reaction.

Unrelated to the Famous for Being Famous Kardashians or the Star Trek Cardassians, though the latter would be somewhere on this scale.