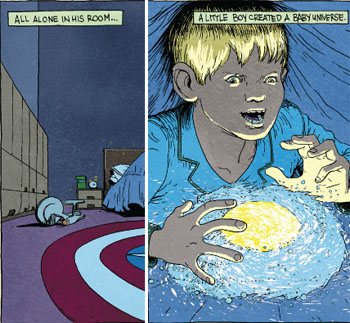 He seems mature enough to handle running a universe.
"Did you hear? Paragus's son was born with a power level of 10,000! 10,000, and only an infant!"
— Saiyan scientists discussing Broly, Dragon Ball Z: Broly – The Legendary Super Saiyan
Advertisement:

Apparently, Plot Leveling happens inside the fictional (and, especially, superheroic) world as well. Not only is it true that Lamarck Was Right about parents passing on their more noteworthy abilities through a number of increasing Evolutionary Levels (never mind that that last bit is there only if you read between the lines really hard), but more powerful people are born chronologically later; just ask anyone who's been to The Future. This trope is most pronounced in those who are currently infants: They don't get any lines or characterization, but they still alter the fate of the world just by existing.

Maybe it's all that Improbable Infant Survival building up and exploding into the world as Pure Energy, or maybe it's just some writer's idea of a "surprising" development, but if you see a baby in any genre which lets people have power disproportionate to their physical and mental ability, that kid is going to be God.

Woe betide any babysitter (or parent) who cannot quite control the baby's immense powers.

Contrast Puberty Superpower, where your abilities show up later. Happens because of Superpowerful Genetics. Do this on an industrial scale and you get a Bizarre Baby Boom. When one of these goes wrong, it's an Enfante Terrible.