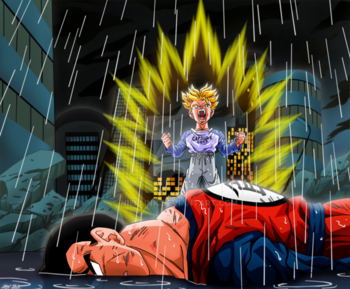 "All I have to do is think about how the androids killed Piccolo and Krillin. [...] And then suddenly... the dam breaks."
Tattletale: It's called the trigger event. Researchers theorize that for every person with powers out there, there's one to five people with the potential for powers, who haven't met the conditions necessary for a trigger event. You need to be pushed to the edge. Fight or flight responses pushed to their limits, further than the limits, even. Then your powers start to emerge.
Advertisement:
Regent: Basically, for your powers to manifest, you're going to have to have something really shitty happen to you.
— Worm

When a character has latent powers or potential, there are three standard ways to unlock it: hit puberty, find a mentor to train them, or just have something really, really bad happen to them. Any form of trauma, physical or mental, can do the trick, but emotional blows are the most prevalent. The death of a loved one is especially common.

Severe trauma tends to release inhibitions that keep hidden potential in check. Strong emotions, most especially rage, work best. As such, the form of the awakening tends to be violent, even, in extreme cases, explosive.

With superpowers, once the bottle is opened, it can't be sealed again. The awakened one will typically need to seek training to control their new powers, so that their every emotional outburst won't trigger a new disaster. A period of How Do I Shot Web? will follow, and learning to control one's emotions or face inner demons is typical.

This tends to coincide with Puberty Superpowers. Puberty is the most likely general time for powers to show themselves, but the specific incidence of the awakening will tend to be a traumatic one. There might be several minor uses of power, resulting from less serious emotional events, before the big push comes that makes the character fully aware of their potential.

Not to be confused with Die or Fly or Defence Mechanism Superpower. Die or Fly occurs when superpowers awaken in response to a life-threatening situation, which isn't exactly the same as trauma (in the cases of purely emotional trauma and seeing others in danger, for example). Defense Mechanism Superpower is when, regardless of when the powers were discovered or attained, they can only be used in dangerous situations (which might not always be life-threatening). See also Angst Nuke and Came Back Strong, which are very extreme variations on this. If the superpowers attained are related to the cause of the trauma, it's an Adaptive Ability.

Eugene's powers manifested just as bullies were all over him.

Eugene's powers manifested just as bullies were all over him.