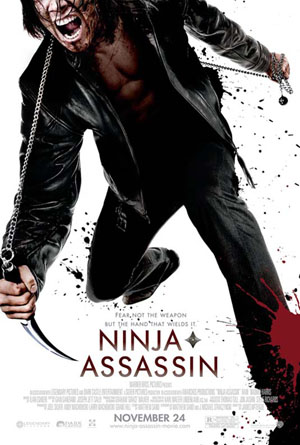 You don't wanna know where that's been.
Advertisement:

An Exactly What It Says on the Tin 2009 action film starring Stephen Colbert's Arch-Enemy, Jeong "Rain" Ji-hoon as Raizo, a Ninja who goes rogue and declares one-man war on his clan. It was produced by The Wachowskis (Bound (1996), The Matrix, Speed Racer) and directed by James McTeigue (V for Vendetta) from a script by J. Michael Straczynski.

As a small child, Raizo is taken in by Ozunu Clan. The head of the clan, Lord Ozuno, takes in orphan children and makes them go through brutal training in order to become lethal assassins. Many years later, Raizo has left his clan and is now being hunted down for his betrayal. He enlists the help of Europol researcher Mika Coretti (Naomie Harris), who has been investigating political assassinations caused by ninja, to put an end to the Ozunu clan once and for all.