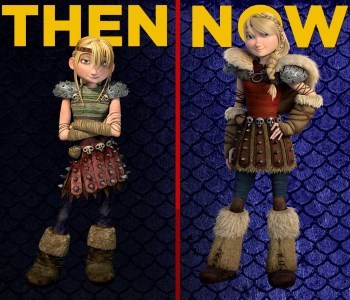 Astrid's new outfit reflects advances in fabric and fur rendering... and also her character growth.
"In the four months since the last episode aired, I've created a brand new, ultra-efficient, technologically advanced Duel Disk System! And that's not all. I also have a sexy new outfit."
— Seto Kaiba, Yu-Gi-Oh! The Abridged Series

A character's main outfit can change over the course of a series, often when it's a new season or new installment. Whether it's a superhero's costume (even if those characters wear an Unlimited Wardrobe otherwise), a military uniform, or a character's Limited Wardrobe, the original outfit will often be radically different from what the characters are wearing later.

The changes can include an entirely different outfit, where only the basic form is kept over. Say a Princess's main dress in the next season is still a Pimped-Out Dress but doesn't share colors, form, fabrics, or decorations. The changes can also be very minor, to the point of being barely noticeable. Say a set of Powered Armor just has a few small vents and fins added. Small changes are more likely when Clothes Make the Legend.

The reasons for this can be due to the creators just liking the new designs or them feeling the current costume is So Last Season, to them trying to reflect cultural changes (which is one of the most common reasons for uniform updates in Real Life), to needing new content in a Merchandise-Driven show. In live-action works, changes can be to make a costume more comfortable and easier to work with for the actors wearing them (so it's an Enforced Trope to avoid actors risking physical harm). In computer animation and video games, it could be due to increases in processing power allowing for greater detail than before.

The larger changes may give a justification for the change, while the smaller ones will just assume the audience will either not notice or accept that the costume was tweaked in the time between installments. Though even after an upgrade a previous outfit may become the Iconic Outfit.

A Super-Trope to Frilly Upgrade (as this trope happens a lot to Frills of Justice), Significant Wardrobe Shift (Character Development shown through costume changes).

A Sister Trope to Beta Outfit (where a different costume is depicted as an early short-lived experiment), Fanservice Pack (where a character's look becomes increasingly sexualised), Earned Stripes (when it's directly tied to rankings and tiers), Early Installment Character-Design Difference (where a character's costume changes early on in a work's history, but then stays stable).