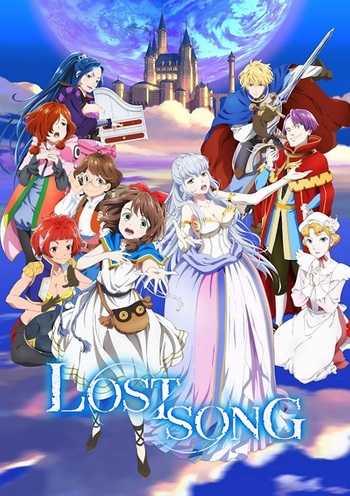 Magic Music to a whole new level
Rin, an energetic girl who loves to eat, lives in a verdant frontier village. Deep within the royal palace in the bustling capital city, the songstress Finis spends her days in solitude. Both share a special power no other person has. A miraculous power that can heal wounds, create water and stir the wind—the power of song. Guided by destiny, the two young women each face an arduous journey with the power of song. The shadow of war looms over the kingdom, tainting even the miraculous songs with the blood of innocents. Loved ones meet their deaths as silent screams echo through a stone prison. As two destinies intersect, will the final song be one of despair, hope or...?
Advertisement:

An original Netflix series (which premiered worldwide on October 5, 2018) and the voice acting debut of singer Konomi Suzuki.

Not to be confused with the Sword Art Online game.