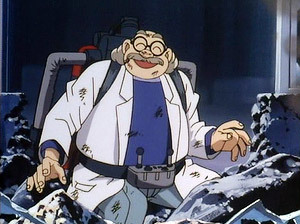 "Heh...well, back to the drawing board."
"Music, landscape gardening, architecture — there was no start to his talents."
— Hogfather (on Bungling Inventor "Bloody Stupid Johnson")
Advertisement:

A trope that started out as a subversion of the Gadgeteer Genius, but is now a trope in its own right, the Bungling Inventor is a scientist (often a Mad Scientist) whose inventions never seem to work properly. In fact, they're prone to truly spectacular cases of Phlebotinum Breakdown. The inventions might do something entirely different than what they were supposed to (like explode, or play "Yankee Doodle Dandy"), or they might seem to do their primary function but have some subtle flaw, or they might work a little too well (like a security robot that throws everyone out of a house, including the people it was designed to protect).

Perhaps the strangest thing about the Bungling Inventor is that he is so bad at inventing that he occasionally accomplishes by accident what the world's most competent inventor could not do on purpose: he may be trying to fix a television and inadvertently create a device which brings fictional characters to life. Strangely, it never occurs to anyone that he's anything other than a failure: the fact that he's created a working time machine does not make up for the fact that he has totally failed to make a machine that produces toast.

Needless to say, this trope is typically found in comedy works, though there are exceptions. Some characters who are usually Gadgeteer Genius, Mr. Fixit or The Professor dip occasionally into this trope.