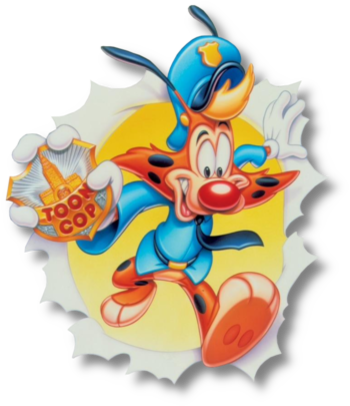 Once upon a time in Toontown,
There was a cat that had it all:
Fortune and fame, top of the game,
Up until he hit the wall!
Now he makes a living downtown,
Walking on a brand new beat,
Slipping through the noonday,
Tripping on a two-way,
Ticket down a one-way street!
— Theme Song
Advertisement:

In 1990s Los Angeles, Bonkers D. Bobcat is Wackytoons Studios' biggest cartoon star — until a rival show beats his in the ratings race, at which point the studio decides to take a new direction and cancels Bonkers' show. Through sheer dumb luck, Bonkers unwittingly comes to the rescue of Classic Disney Shorts star Donald Duck and, at the same time, helps veteran human cop Lucky Piquel arrest a mugger. This heroic act lands Bonkers a new job on Hollywood's Police Department, where he works with the reluctant Piquel in the newly-formed Toon Division. About forty episodes later, Piquel is offered a new job working for the FBI, and Bonkers gets a new human partner — Sergeant Miranda Wright.

Backstory aside, the TV series chronicling Bonkers' exploits as a cop was created by Disney as a result of them wanting to make a TV series based on a Toon Cop character. Although the episodes with Wright as his partner (produced by Duane Capizzi and Robert Hathcock) come later chronologically, they were actually produced first; however, Disney was reportedly not pleased with how they came out and put a new production team (headed by Robert Taylor) in charge. The Taylor-directed episodes introduce Lucky Piquel as Bonkers' partner. The last of the Taylor episodes, "New Partner on the Block", bridges the gap between those episodes and the nineteen Capizzi-directed episodes that made it into the show's run. Sadly, due to the 1995 Oklahoma City bombing (further exacerbated by 9/11, though not the original source of its removal as is commonly believed), the episode was cut when Toon Disney still aired classic Disney shorts and cartoon shows. It was reinstated when the entire series was released on Disney+ in 2019.

To complement the series, twelve short cartoons starring Bonkers were made to show what his cartoons were supposedly like before he was fired. These shorts were shown on the Saturday Morning Cartoon series Raw Toonage (with one exception, "Petal to the Metal", which was shown theatrically before the film 3 Ninjas), and they were also rerun in four special compilation episodes during the series' run.

Now has a Character Sheet. Please feel free to help it grow.

During a struggle with the Collector, Lucky Piquel accidentally slips off one of the latter's four-fingered gloves, revealing a hand with five fingers that he hides behind this back. This ultimately reveals that the Collector is actually a human in disguise.

Toon with No Name

During a struggle with the Collector, Lucky Piquel accidentally slips off one of the latter's four-fingered gloves, revealing a hand with five fingers that he hides behind this back. This ultimately reveals that the Collector is actually a human in disguise.

Toon with No Name