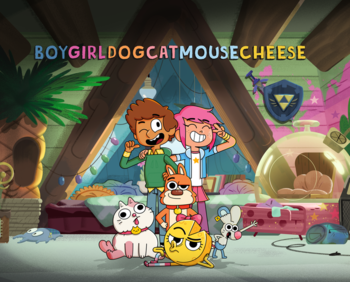 Boy Girl Dog Cat Mouse Cheese is an American/French/Irish animated comedy for the BBC that premiered on CBBC on October 31st, 2019. The series was developed from an original concept by American illustrator Jeff Harter (who also created Packages from Planet X) and is a co-production between Cloudco Entertainment, WatchNext Media, and Kavaleer Productions.

The show centers around a boy, a girl, a dog, a cat, a mouse, and a piece of cheese, all respectively named after what they are, who are living together as a Dysfunctional Family.

The series can be watched on the CBBC website

In June 2019 (yes, before the show even premiered), the series was renewed for a second season.

Cheese lets success go to her head despite her claims that it hasn't.

Cheese lets success go to her head despite her claims that it hasn't.