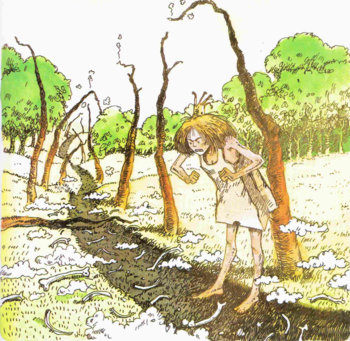 Dragon Tracking 101: follow the trail of burning destruction.
"Quick. What is the absolute worst place in this Valley one could go? The most insanely suicidal place to be found? The place where only a great fool would venture — and only an insane fool would follow?"
— How the final battle of Codex Alera is located
Advertisement:

Alice can't find Bob, where could he have gone?

This trope centers on finding a character by the fact that they have a tendency to cause destruction wherever they go. So if you can't find them, just look for the nearest explosion. Or, if no explosions are imminent, do as the quote above and think of the place where the most potential trouble could occur and you'll end up with much the same result.

Such characters tend to be Chaotic in nature. They may be heroes who frequently use plans that are Crazy Enough to Work, or just have the plain rotten luck to always cause collateral damage wherever they go no matter what they do to avoid it. Alternatively, you may have a Mad Scientist or Bungling Inventor whose creations always blow up, letting you know if they're in their lab or not. At best, they're simply inclined or compelled to find the chaos themselves. A danger zone may also be indicated by a Foreboding Fleeing Flock.

The intent behind this trope is that the chaos they cause will give you an almost immediate idea of where to locate them. Finding a site of destruction and knowing that they've been there is a separate idea which involves a more protracted hunt.