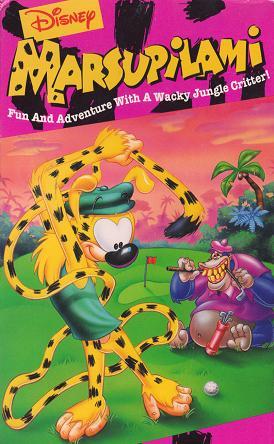 In 1992, a first Animated Adaptation of André Franquin's Marsupilami was launched. Produced by Disney and aired originally as a segment on Raw Toonage before becoming its own show the following year, it only lasted a season and had little in common with the original, beside the name and the general appearance of the hero. The title Marsupilami could talk and was a laid-back smartass rather than a volatile and cunning Papa Wolf. All of the supporting cast was original. He was accompanied by his buddy, a big ape named Maurice, and met a lot of African animals. Another change on Marsupilami that he now has the ability to speak and does not just say "HOUBA!" The show followed a Three Shorts format; in between a new short starring Marsupilami at the beginning and a Raw Toonage repeat, there was either a short starring Sebastian from The Little Mermaid (one such segment was repurposed from Raw Toonage interstitials) or Bill Kopp's Schnookums and Meat, the latter of which was later spun off into its own half-hour series in 1995 as part of The Disney Afternoon.

It was first aired on CBS saturday mornings in the US. It was later reran on the Disney Channel and later, on Toon Disney. 15 out of 29 shorts were released on V/H/S and Betamax by Walt Disney Home Video.

Another, more comic-book accurate version was later made by a French studio, and yet another one, titled "Marsupilami — Houba Houba Hop !", which is less close to the books but in which the Marsupilami still retains his comic book characterization.

Tropes specific to the Disney cartoon: