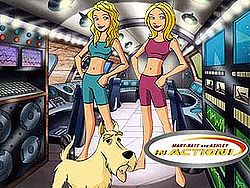 Mary Kate and Ashley IN ACTION! was a short-lived Saturday Morning Cartoon series produced by DiC Entertainment that aired on ABC. Coming off of the big Mary-Kate and Ashley Olsen craze throughout The '90s, the girls voiced a pair of twin sisters named Misty (for Mary-Kate) and Amber (for Ashley), a pair of undercover teen superspies that go around the world solving crimes and mysteries mostly relating to things in the fashion world, going to cities such as Rome, Paris and London (where they went in their own DTV-movies before).

The show was canceled after just one season (consisting of only 26-episodes) due to poor ratings.