Western Animation / It's Tough to Be a Bird 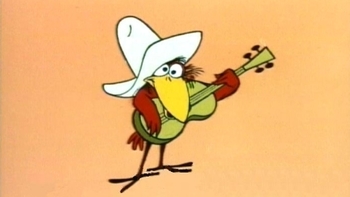 It's Tough to Be a Bird is a 1969 animated short film from Disney. It was directed by Ward Kimball, one of Disney's Nine Old Men.

It is a short film about birds. The entire film consists of a generic-looking red bird addressing the camera. The bird starts by tracing out the history of birds and how they evolved from other animals. It then talks about the bird's role in nature and its relationship with man, dwelling on how birds have both inspired humanity to discover its own way to fly, and driven humans to kill birds.

Won the Academy Award for Best Animated Short Film. Disney had won this award quite often during The Golden Age of Animation, but wouldn't win again until Paperman in 2013.