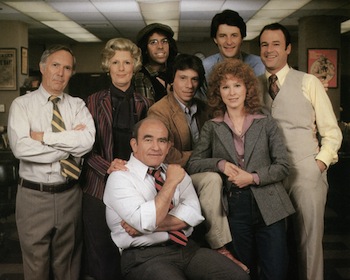 This Dramatic Hour Long series is a Spinoff of the Sitcom The Mary Tyler Moore Show. Edward Asner reprises his role of Lou Grant from there.

After the Grand Finale of The Mary Tyler Moore Show, Lou is now in California working as the city editor for the fictional Los Angeles Tribune. He manages to keep his character, in both senses, for five seasons of this. The other regulars were general assignment reporters Joe Rossi (Robert Walden) and Billie Newman (Linda Kelsey) (Kelsey joined the show in the fourth episode, replacing Rebecca Balding, who had portrayed general assignment reporter Carla Mardigian); managing editor Charles Hume (Mason Adams), an old friend of Lou's who convinced him to move from Minneapolis to Los Angeles; assistant city editor Art Donovan (Jack Bannon); photographer Dennis Price (Daryl Anderson), usually referred to as "Animal," and the Tribune's widowed, patrician publisher, Margaret Jones Pynchon (Nancy Marchand).