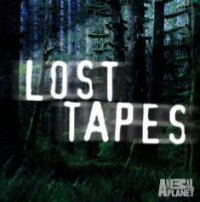 "There are creatures science refuses to recognize...but if new technology makes us question what is real...If OUR EYES SEE IT...IF OUR CAMERAS CAPTURE IT...DOES IT EXIST? ENTER A REALM WHERE FACT meets FICTION....SCIENCE meets LEGEND...WHERE NIGHTMARES COME TO LIFE...DO YOU BELIEVE?"
— Opening narration before episode titles.
Advertisement:

Animal Planet's version of The Blair Witch Project, Lost Tapes is a Mockumentary series which asks "What If? there really are monsters like Bigfoot, the Chupacabra and other beasties out there?" Each episode starts with a disclaimer pointing out that it's merely "inspired by the possibility that hidden creatures exist". Normally the monsters aren't actually shown, save for glimpses of CG, Props or Costumes. To justify its airing on Animal Planet, the series laces its footage with factoids about real animals supposedly related to the featured monster. Sometimes this is in an attempt to lend an air of plausibility to the scenario, other times the factoids end up being scarier than the film.

Currently the series is aired back to back, with two half-hour episodes strung together, and has received a budget upgrade (or at least, a heavier reliance on practical FX).

The FX still look mildly silly at their best, but it can be effective on rare occasions. It helps that most of the People in Rubber Suits effects are hidden by the shaky camera work.