Film / All the President's Men 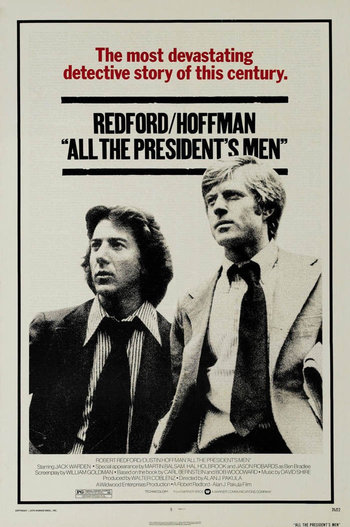 Bob Woodward and Carl Bernstein are about to ask you a few questions.
"Follow the money."
— "Deep Throat"
Advertisement:

The film—which cracks the AFI "100 Thrills" list at #57—was adapted by William Goldman from the book of the same title, chronicling the investigative reporting of Woodward and Bernstein from their initial reports on the Watergate break-in to the revelation of the Richard Nixon tapes in 1973. The All-Star Cast also includes Jason Robards, Jack Warden, Martin Balsam, Hal Holbrook, Jane Alexander, Stephen Collins, Ned Beatty, and Meredith Baxter.

, the story is true.