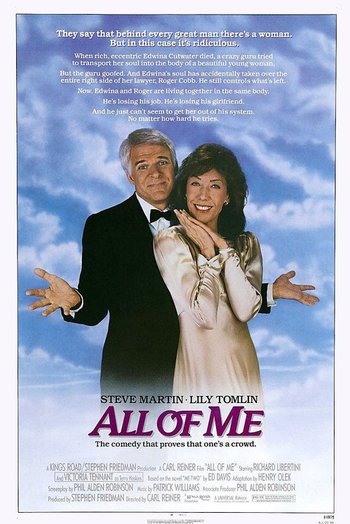 A 1984 comedy-fantasy film starring Steve Martin and Lily Tomlin, directed by Carl Reiner. This was the last of four movies Martin and Reiner made together (the others were, in order, The Jerk, Dead Men Don't Wear Plaid and The Man with Two Brains).

The plot concerns dying millionairess Edwina Cutwater (Tomlin) who, having never had a real life, makes a deal with her stablemaid Terry (Victoria Tennant) to help the younger woman Ascend to a Higher Plane of Existence, allowing Edwina to take over her body with the help of an eccentric Tibetan mystic (Richard Libertini). However, the procedure is screwed up, causing Edwina's soul to instead be passed into Roger Cobb (Martin), her recently-fired lawyer. Hilarity Ensues as Roger, whose feelings towards his ex-client are less than warm, attempts to transfer Edwina's soul to the right body while coping with her having complete control over the left side of his, all the while trying to convince his boss, fiancee and everyone else around him that everything is perfectly normal.