Film / The Man with Two Brains 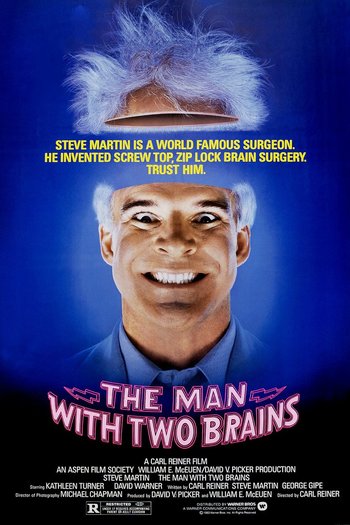 A 1983 comedy film directed by Carl Reiner and starring Steve Martin as Dr. Michael Hfuhruhurr (it's pronounced exactly how it's spelled), a brilliant but arrogant neurosurgeon newly married to a monstrous gold-digging Black Widow (Kathleen Turner), who belatedly meets and falls in love with his soulmate, Anne Uumellmahaye (Sissy Spacek) whose one tiny defect is that she's a disembodied brain in a jar. Hfuhruhurr naturally attempts to find a body into which to transplant her. Hilarity Ensues. (No, really!)

Like all of Martin's early movie work, it's pretty much gag-a-minute, with two particular highlights being Hfuhruhurr facing the world's strictest drunk-driving test, and the identity of The Elevator Killer.