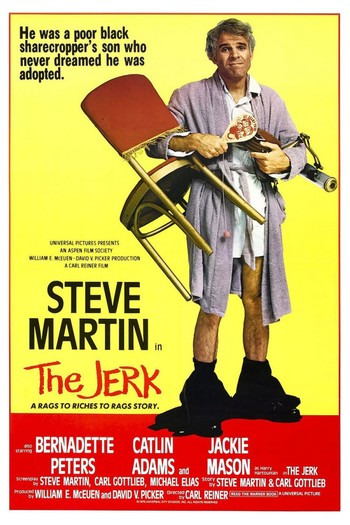 "It was never easy for me. I was born a poor black child."
"Lord loves a working man, don't trust whitey..."
— Navin R. Johnson (played by Steve Martin)
Advertisement:

The Jerk is a 1979 American comedy film directed by Carl Reiner, and co-written by and featuring Steve Martin in his first starring role.

The film follows Navin R. Johnson (Martin), a bum, who tells his life story. After finding out that he is not a natural born child of his black parents, Navin decides to leave home and make it for himself in the world. Despite the fact that he is woefully unprepared, Navin manages to land himself a job, escape a decidedly random psychopath (played by M. Emmet Walsh), run away with a traveling carnival, find the woman of his dreams (Bernadette Peters), and hit it rich, before finally losing everything and ending up a bum in the street. Along the way, the film details Navin's interactions with the people and world around him, where his common misunderstandings of every-day situations often lead to hilarious results.

The film was remade as a Made-for-TV Movie (although billed as a "sequel"), The Jerk, Too, in 1984, starring Mark Blankfield as Navin. It was produced (but not written) by Steve Martin.

If you're looking for tropes about jerks, see Jerkass and The Jerk Index.