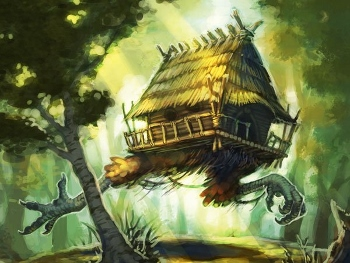 Basically, a building suddenly starts to inexplicably move, but it's just Rule of Cool. Bonus points if it shows anything happening inside during the move, such as rooms shaking, swerving or tilting and objects or even people being displaced.

See also Everything Dances. If it's a fortress designed specifically to move, see Base on Wheels. If it's a statue that starts to move, then it may be a Living Statue. For this trope's much bigger cousin, see Mobile City.