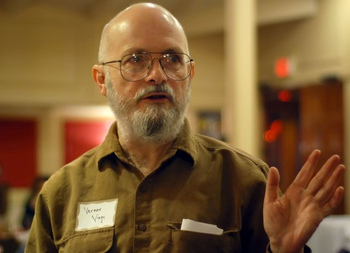 An influential modern Science Fiction writer, best known for his Zones of Thought series, two of which have won the Hugo Award for Best Novel, and for his novel Rainbows End, which also won a Hugo. He has also won the Hugo Award for Best Novella twice, for "Fast Times at Fairmont High" (to which Rainbows End is a Spiritual Successor) and the stand-alone "The Cookie Monster".

Vinge is the principal popularizer of "The Singularity": the idea that the ever-increasing pace of technological progress makes the nature of life beyond 20 Minutes into the Future fundamentally unpredictable, even nineteen minutes into the future. That is, over the next thirty years, we could get as much change as in the whole last century, then as much again in the next decade, and the three years after that, and so on, until we hit the limits of the physically possible not that long from now. What happens next is inherently ineffable, but it's a good bet that humanity either becomes as gods, or is dismantled for spare parts.

Whatever the actual plausibility of the idea, Vinge has the concept of The Singularity fertile ground for stories. Ironically, Vinge has yet to write a novel showing an actual depiction of a singularitynote This is actually consistent with what he believes: any kind of Singularity will not only be inherently unpredictable, but inherently inscrutable (that is to say, not understandable); his two most well-known series actually sidestep the issue by either contriving circumstances whereby the Singularity doesn't/isn't able to happen, or by having the singularity already having occurred. For example, the Zones of Thought series takes place in a universe where physical laws vary based on location, so The Singularity isn't something that happens at a certain time but rather is a fact of life depending on where you are in the galaxy. Further, in the Across Realtime series, the Singularity is first delayed (via technological stasis) then skipped over by characters (via literal stasis).

Rainbows End comes the closest, examining the beginnings of a Singularity. Taking place 20 Minutes into the Future, the protagonist has just been cured of Alzheimers, leaving him with a few years of amnesia and some personality changes. While exploring the strange new world, he gets sucked into a contest between a Diabolical Mastermind chasing after perfect mind control, and a chessmaster who might not be human.

Vinge was also one of the first to introduce the world to concepts that later became staples of the Cyberpunk genre, like Cyberspace and the Digital Avatar, in his cult-classic hacker novella, "True Names".

Also worthy of note are two novels and a novella comprising the Across Realtime sequence. The major initial technology change is the invention of the Bobble, a projected sphere that completely separates the inside from the outside. This is initially believed to be permanent and lead to whoever is inside dying when the oxygen runs out. The discoverers of the Bobble form the "Peace Authority" and take over political power, Bobbling all who oppose them and enforcing an end to war (and any technological progress that might threaten their superiority).

Works by Vernor Vinge with their own trope page include:

Other works by Vernor Vinge provide examples of: