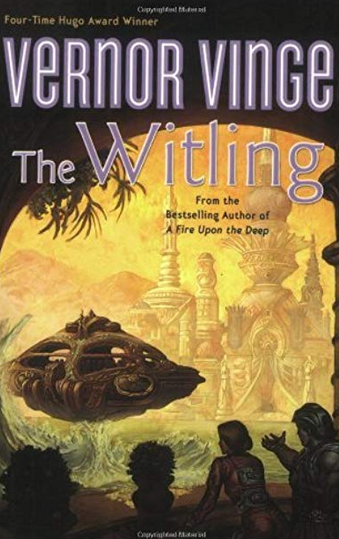 Science was a toy for children—or the mentally crippled.
— Tagline, The Witling
Advertisement:

The Witling is a short standalone Science Fiction Novel by Vernor Vinge, published in 1976.

An expedition to an inhabited planet — only the fifth time in thirteen thousand years that humanity has encountered intelligent life, or even evidence of such — goes wrong when two humans are stranded and captured by the natives, the Azhiri. A race of powerful psychics, the medieval Azhiri regard science writ large as a joke, useless to "normal" people, since psychic powers can solve most of the problems that would otherwise necessitate scientific research.

Unfortunately, the hapless Yoninne Leg-Wot and Ajão Bjault don't have time to indulge in observation — all of the food on Giri is laced with low levels of heavy metals (think lead and mercury), which will slowly poison them the longer they stay — if the medieval Azhiri don't murder them first. Caught in a deadly medieval drama of palace politics and primitive psychics, Yoninne and Ajão have to race against time to retrieve their equipment and escape from Giri.

Because of the short length of this novel, almost all of its plot points are Spoilers. Spoilers ahead will be unmarked.