Everyone is a Super 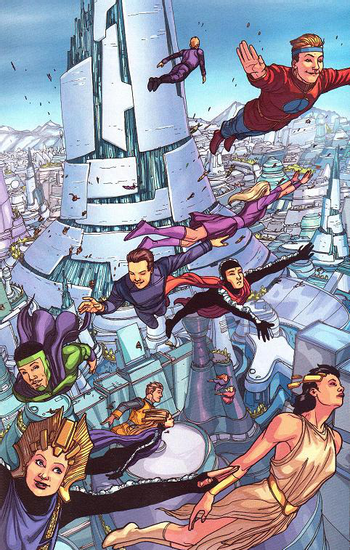 "One of the few human residents, Marisa Kirisame was just an ordinary girl, flying as she normally does."
— Prologue, Touhou Koumakyou ~ the Embodiment of Scarlet Devil
Advertisement:

Thanks in part to the fact that Most Writers Are Human, typically, stock, unpowered human civilians are considered the "normal", most populous, average bystander of a setting. Where Everyone's A Super, however, the average bystander is a Badass Bystander. Whether it is because you are in a sci-fi setting where everyone is either a cyborg or robot or psychic, or a fantasy world with dragon-taurs walking the sidewalk next to the Child Mage, there is the assumption that not only are superpowers not worth hiding, but that they can be expected of anyone and everything in the setting. As such, anyone with superpowers are just plain not as "special" as they would be in a world with muggles. Average bystanders may openly use their ice powers as air conditioning.

Sometimes, this is not exactly setting-wide. It can simply be a hidden village of strange superpowered beings that exists with limited access to the "normal" world, and sometimes it is completely divorced from "our world". Regardless, the point is not the fantastic world, but that any superpowers, skills, or abilities that a major character may have are rendered common and unremarkable by the standards of the place they are in.

If a character who is normally special or powerful suddenly stumbles into a place where Everyone's A Super, they may find out they are merely one of The Chosen Many. If the "superpower" is I Know Karate, then Everybody Was Kung-Fu Fighting.

In serious works, if the hero is lucky, he or she may have some appropriately more epic power than most, otherwise, the heroes may be little more than Action Survivors, even if they have superpowers. Frequently, however, it is used in comic works, where the notion of superpowers are lampooned by just giving them out to everyone until everyone is so special that nobody is special. If the hero is very unlucky, they might have very weak powers, or even be an Un-Sorcerer.

Of course, some supers are more super than others, especially the really dangerous bad guys.

Do note that this isn't for settings where superpowers are unusually common, or where everyone of note has superpowers, but where you could honestly expect unimportant, unnamed characters to whip out superpowers, and where that superpower use is not considered unusual or noteworthy. It does, however, include fantasy settings where everyone possesses a basic capacity for magic, even if they never train in or use it (as mere bystanders could be capable of at least basic magic, and "wizard" might be as common a career choice as "shopkeeper").

Occasionally overlaps with World of Badass. For when it only seems this way from the perspective of an animal or Insufficiently Advanced Alien, see Humans Are Cthulhu. Compare and contrast with Normal Fish in a Tiny Pond.