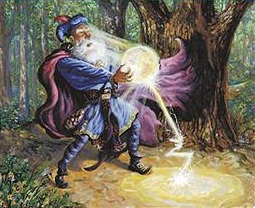 A subtrope of Mana Burn — a power that drains someone else's Mana Meter and gives it to the caster. Useful both to replenish the user's mana and to prevent the enemy from being able to attack back. Some opponents die when they lose all their mana.

A Sister Trope to Life Drain (when this is done to Hit Points).

Compare Energy Absorption, Liquid Assets, and Magic Eater. A subtrope of Meta Power, as it deals with impacting a supernatural ability.

An Imp Mii can use their demonic magic to drain MP from enemies.

An Imp Mii can use their demonic magic to drain MP from enemies.