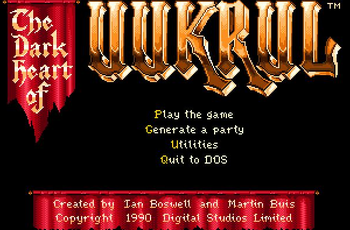 Dark Heart of Uukrul was a CRPG, written by Digital Studios Limited and released by Brøderbund Software for the Apple ][ in 1989, with a DOS port occuring the following year.
Advertisement:

In it, you control a party that sets out to defeat Uukrul, an evil wizard who took over the city of Eriosthé. His main power is in the ability to freely phase between the mortal plane and the astral plane, and that power is held in the titular dark heart, which is stored in an urn in the catacombs between the city, and is obviously heavily guarded to boot.

Dark Heart of Uukrul contains examples of the following tropes: