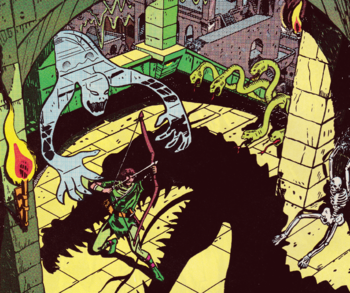 "You are in a maze of twisty little passages, all alike."
— Colossal Cave Adventure
Advertisement:

Dungeon Crawling is the act of exploring a dangerous area while looking for treasure or some other Plot Coupon or MacGuffin. The characters must battle enemies (usually monsters) and use their skills and equipment to negotiate obstacles (usually traps). Usually, but not always, there is a Boss Battle at some point, and a MacGuffin or Plot Coupon at the end.

This is what many Role-Playing Games (especially video game ones) are all about — at least historically — but it is actually one of The Oldest Ones in the Book, since even myths feature it (a trip into the underworld is part of The Hero's Journey, after all). However, it was the Cliffhanger film serials of the early 20th century that defined the trope, and the Indiana Jones movies that made it popular again later.

The term comes from early RPGs, such as Dungeons & Dragons, that often had the player characters exploring some wizard's dungeon. "Dungeon crawl" is analogous to "pub crawl", a continual stroll from dungeon to dungeon to dungeon.

Note that in Real Life a "dungeon" was a type of prison, often in the lower parts of a castle, but the games expanded it to mean "any ruins or subterranean area." In fact, the term is used today for any dangerous area in an RPG, even open-air ones, as long as the same fight-your-way-across logic applies to it. This is usually to distinguish it from the two other kinds of locale in such games, towns (generally defined as anywhere that has peaceful NPCs or businesses like stores, hotels and bars) and the overworld (which, in most cases, is exclusively for getting between towns and dungeons, with the only real obstacles being Random Encounters.)

As said in an interview in Dungeon, #112, the whole dungeon shtick originated from a skirmish wargame played by Gygax, Arneson and others that involved breaking into a castle through the cellars — this turned out to be so much fun that tunnel fighting became a regular theme (the "dragon" element, and extended dungeon adventures, came slightly later, after the "break-in" premise became stale). Stir in Professor Tolkien's Moria scenario for a little fantasy and the rest, as they say, is history.

Dungeon Crawlers are also a subgenre of RPGs in which the story, setting, and town areas (usually one at most) are downplayed in favor of massive dungeons requiring level grinding, trap-avoidance, and endurance. Roguelikes are a subgenre of dungeon crawler, further distinguished by procedural level generation and highly unforgiving game mechanics.

Not to be confused with the game Dungeon Crawl, though it is a good example of this trope.

Note: Several other video game settings, such as Temple of Doom, aren't necessarily dungeon-specific — they could also refer to themed Platform Game levels, or to places of relative safety.