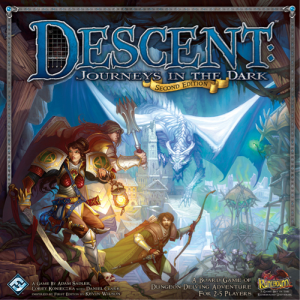 The Second Edition box art
Descent: Journeys in the Dark is an Adventure Board Game that pits a team of Dungeon Crawling heroes, each played by a different player, against the Overlord—a single player who controls all the monsters and traps on the map. It consists of multiple "scenarios" that define the battle map (built together from differently shaped tiles), the monsters, and the session goals for the heroes and the Overlord, and is often viewed as a Spiritual Successor to HeroQuest.
Advertisement:

Originally published by Fantasy Flight Games in 2005, Descent received a number of Expansion Packs that added new scenarios, heroes, and monsters. The original included basic rules for carrying over experience gained in earlier scenarios. The 2008 expansion, The Road to Legend, introduced the rules for campaign play that had to take several sessions to complete and added plot elements for the Overlord, bringing the experience even closer to a Tabletop RPG. The second edition, released in 2012, revamped the entire game with campaign mode as a core feature in mind, and has since phased out the first edition completely and received a number of expansions of its own.

. In June 2016, Fantasy Flight has also released a free companion app on Steam, Descent: Road to Legend, which takes over the role of the Overlord, allowing human players to play in full co-op mode against the computer.