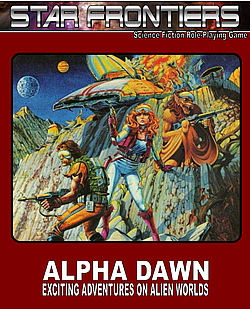 Star Frontiers takes place near the center of a spiral galaxy. A previously undiscovered quirk of the laws of physics allows starships to jump to "The Void", a hyperspatial realm that greatly shortens the travel times between inhabited worlds, once they reach 1% of the speed of light (3,000 km/s).

The basic game setting was an area known as "The Frontier Sector", where four sentient races, the Dralasites, Humans, Vrusk and Yazirians, had met and formed the United Planetary Federation [UPF]. A large number of the star systems shown on the map of the Frontier sector in the basic rulebook were unexplored and undetailed, allowing the Gamemaster (called the "Referee" in the game) to put whatever he wished there.

Players could take on any number of possible roles in the setting but the default was to act as hired agents of the Pan Galactic Corporation in exploring the Frontier and fighting the aggressive incursions of the alien and mysterious worm-like race known as the Sathar. Most published modules for the game followed these themes.

The game used only 10-sided dice. Game mechanics were percentile-based, with attributes rated 1-100 (with starting characters rated from 20-75). Player characters had eight attributes, which were paired together in four groups that started with the same score for each attribute of the pair: Strength/Stamina, Dexterity/Reaction Speed, Intuition/Logic, and Personality/Leadership.

The system is skill rather than class-based. There were only 13 skills in the Alpha Dawn set, rated from level 1-6, but each included a number of sub-skills. Technician, for example, included "Operating Machinery", "Repairing Machinery", "Detecting Alarms/Defenses", "Defeating Alarms/Defenses", and "Opening Locks". Each of the subskills had a base percentage level of success modified by 10% times the character's skill level. Combat skills used half of the character's Dexterity or Strength as their base success level and didn't have much in the way of subskills.

Characters chose a Primary Skill Area (Military, Technological, or Biosocial) which gave them a discount for purchasing skills in that PSA with experience points. A character's attributes had no effect on their non-combat skill success rates, but the Referee could also call for percentile rolls against attributes to succeed at tasks that no skill covered. Experience points could also be spent to improve attributes, on a one-to-one basis.

The Knight Hawks set introduced five new spacecraft skills, each of which required high levels of the skills from Alpha Dawn before they could be taken. The spacecraft Piloting skill, for example, required that the character already have Technician 6 and Computer 2. They were also much more expensive to purchase through experience points.

The basic rules set was called Alpha Dawn. It was released as a boxed set that included a fold-out poster map of a futuristic city on one side and various sections of alien terrain on the other, a bunch of die-cut counters, the introductory module SF0 Crash on Volturnus, and a pair of 10-sided dicenote And a white crayon to color in the numbers on the dice. This was before dice were commonly manufactured with pre-painted numbers..

Another boxed set called Knight Hawks presented a starship combat system and starship-related skills and rules for the regular RPG. It also included a fold-out poster map with empty space on one side and a space station and ship deckplan on the other, along with another set of spacecraft counters, SFKH0 Warriors of White Light, and another pair of 10-sided dicenote And another white crayon to fill in the numbers on the dice.

A late addition to the game was Zebulon's Guide to Frontier Space, which introduced several new races and an entirely different basic rule system (similar to TSR's Marvel Super Heroes FASERIP system). It was, however, the last book produced for the line by TSR.