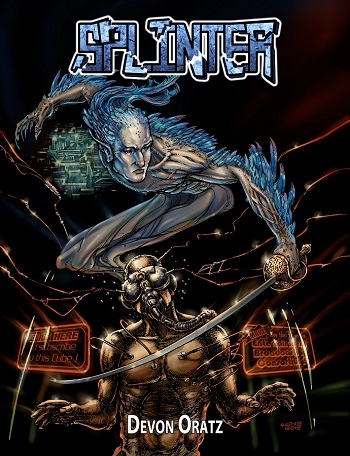 ON DYSTOPIAN EARTH, only the rich and the famous can afford personal freedoms. And the only way to get famous is to put on the best show you can... or die trying
IN THE SPLINTER, everything is out to kill you. Even Fellow Avatars. And when you die in The Splinter, you die on Earth.

is a fantasy/sci-fi tabletop RPG by End Transmission Games. The game's chief gimmick, as the blurb above suggests, is its dual nature: You play a citizen of a dystopian earth who is in turn a Player in a massive virtual-reality fantasy RPG called The Game. The Game is one part fantasy RPG, one part Arcade Deathmatch, one part pro football, and one part soap opera. It is the pinnacle of entertainment, and what allows Games.Corp to maintain control of the Plebeian Masses.

On the other side of the equation is the Avatar, which the player's Player inhabits when playing the game. Avatars are shape-shifting demigods who inhabit The Realm, a universe composed entirely of an infinite, shape-shifting mega-dungeon. The Realm's history stretches back 100 billion years, including the rise and fall of thousands of Precursor civilizations that have all left relics of their technology behind for modern societies to discover. Recently, the citizens of the Realm have been under assault by the "outsiders", strange beings from beyond reality who possess Avatars and force them to participate in murderous games...

, was released soon after Splinter was published. It details the titular character’s rise from the slums of Mumbai to fame and fortune in the game. In addition to providing extra insight into the game’s world, stats are included for his human and avatar forms.

The game's Web site can be found here

The creator's blog can be found here

Tropes included in the game: