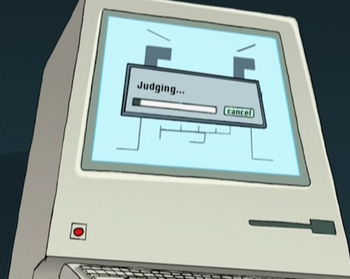 Societies in the future, particularly in older media or modern works with elements of Retraux, are sometimes depicted as having a computerized justice system. Part of the use of this trope is for shock value (to modern audiences accustomed to more humanistic values underlying their familiar legal systems); the other part of it is to reinforce that the setting is either The Future, 20 Minutes into the Future, another planet, an Alternate History, or some other futuristic or otherworldly setting. Occasionally, a variant will even show up in the Present Day. Sometimes, but not always, a symptom of a futuristic Kangaroo Court, as computers can be programmed by human beings to distort the truth or cover up.

Modern consensus is that a truly computerized justice system is unlikely. Judges have to puzzle through difficult legal reasoning that often depends heavily on experience, "common sense", and a sense of justice. While a lot of the rote work of the courts can be automated, you'd be surprised how many issues require human judgment to resolve fairly. Meanwhile, juries also rely heavily on common sense and experience with human beings to figure out if other human beings are trustworthy. A computer that could replicate the kind of human judgment needed to consistently decide cases in a way people would accept would probably be an AI so sophisticated it wouldn't be worth bothering to build it.

What role computers play in the actual trial can vary considerably. Usually the computer is either the Judge, Jury or both. Computerized prosecution is also common, somewhat more so than a computer playing the role of Defense Attorney (though these show up, as well, from time to time).