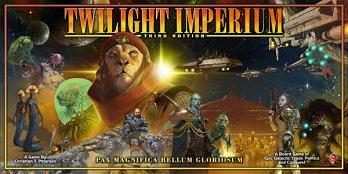 How many board games let you play as a lion? In space?!
The creative conquest of space will serve as a wonderful substitute for war.
— James S. McDonnell
Advertisement:

The throne to the galactic empire is empty and several alien races put forth bids for it. Your goal is to guide your race to meet the conditions necessary to claim the throne and take control of the known galaxy/universe.

Twilight Imperium (now in its fourth edition) is a tabletop/board game that uses hex map tiles to build a new map for each game. The setting is a galaxy where a minimum of three players and maximum of six can choose from among ten different alien races. Gameplay strategies may include battles, trade, politics, and/or any combination of these strategies. In fact, it is entirely possible and not all that uncommon to win the game without fighting a single battle, by earning points for accomplishing goals not related to combat.

The game set includes the map tiles, race sheets, ten-sided dice, several different types of cards (action, political, technology, and objective), plastic pieces for starships and ground forces, and many other extras. The ultimate goal of the game: To conquer the universe? To destroy your enemies? Nope: To get ten objective points.

The players begin the game by taking turns using the system tiles to create the map of the galaxy. Putting empty systems or systems with obstacles by your opponents and keeping all the resource-rich planets for yourself can lead to alliances or vendettas forming before the game really begins.

Once the map is built each player starts off with preset ships, resources, a home system, and certain special abilities. Markers dictate how many tactical actions can be taken in a round, how many strategic actions, and how many ships may be assembled into a fleet. Through the use of these tokens the player can move fleets, increase fleet size, or activate strategy cards. Objective points are collected by achieving randomly-selected goals or controlling certain systems, most prominently Mecatol Rex, the former Imperial capital. Each turn each player chooses a strategy card that lets them perform a special action and lets all the other players perform a "secondary" action. Strategies aid in building ships, attacking other players, forcing cease fires, developing new technology, fostering trade, or most importantly: scoring victory points directly.

The Shattered Empire expansion set added several new races and enough plastic pieces to play the game with up to 8 players, along with lots and lots of cool optional rules.

The Shards of the Throne expansion added a few more new races, a few more cool new optional rules, and a more structured scenario covering the end of the old empire with a fixed map.

The fourth edition of Twilight Imperium was released in 2017. It includes some of the content from the third edition's expansions, such as factional technology, flagships, and all the factions. It also makes a number of tweaks to the game's mechanics, largely with a mind to fixing perceived flaws with the previous edition.

The Prophecy of Kings expansion for the fourth edition was released in 2020, adding a similar variety of features as the original Shattered Empire expansion did, including more pieces for up to 8 players, leaders, an exploration mechanic and 7 new races, bringing the total to 24.

Fantasy Flight Games also released The Roleplaying Game of this setting, but unfortunately it was short-lived (approximately two years, tops) as company restructuring and fears over the extensive Shout-Out use becoming fodder for plagiarism lawsuits took their toll. Hints have emerged during GenCon 2020 that Edge Studios (the successor to FFG's own now-closed RPG division) is developing a new roleplaying game for the Twilight Imperium universe using the Genesys rules.

This board game features examples of: