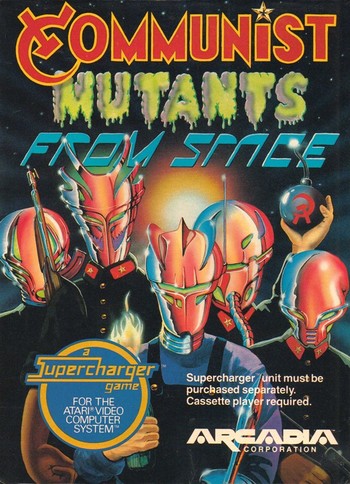 Aliens come from another planet. Their entire culture, history, and even biology could be radically different from that of us Puny Earthlings. It should not be surprising if they are so different that we can't comprehend them at all.

Fortunately, though, it turns out that aliens are really just humans with some bits glued on. Same with their ideology: they're just a thinly veiled stand-in for whomever the public is politically afraid of at the moment, or whomever in Earth history the writers want to anvilize the viewers about. Basically, this is a Planet of Hats where the "hat" is some feared human ideology. Whether or not the target ideology actually deserves the criticism, or is actually bad, can, and often does, vary from viewer to viewer. Sometimes Some Anvils Need to Be Dropped, other times the writer enters The War on Straw due to problems with themselves or society.

While Scary Dogmatic Aliens being racist tends to get associated with the example of "Aliens as Nazis" below, the truth is that all four types are racist, as this trope relies heavily on an "Us vs Them" dynamic; not to mention how racism isn't limited to, for example, the Nazis or even the right-wing

All but the best writers end up giving in to this to some extent. Some of the best writers actively revel in it. After all, it may be a story about aliens, but it is intended for a human audience (usually).

If a show is lucky enough to be in production when the public's number one scary ideology shifts, there's a good chance that we'll see the aliens switch dogmas as well. That, or a new race will show up and supplant them as the top threat. These practices run the attendant risks without any forethought.

Hybrids are also common, probably because the writers have only a passing understanding of what the popular scary ideology is really all about. Note how often political pundits on both sides compare their enemies to Nazis in recent years to see that this extends beyond fiction.

Slightly more self-aware, or single-minded, writers will do a bit of Lampshade Hanging by giving the aliens trappings so obviously derived from the source that you can't help but notice, like putting them in Nazi uniforms. Compare Master Race, for a cultural group who are not necessarily aliens but still see themselves as superior. A Sub-Trope of Aliens Are Bastards.

Scary Dogmatic Aliens generally take on one of a handful of forms:

"All inferior creatures are to be considered the enemy of the Daleks, and destroyed!"
— A Dalek, Doctor Who

The second oldest form of the trope on this page. These aliens are regimented, efficient and want to kill everyone who doesn't submit to them. Their leader is a charismatic psychopath who rules with an iron fist. Often obsessed with genetic purity, sometimes with the cute little hypocrisy that their leader isn't genetically pure. And when they occupy the Earth, they will often adhere to The Right of a Superior Species.

The most widespread form and the second-most frequently used. It is still present though often subverted in the post-Cold War era. Everyone is the same, individuality is a capital crime, belief in any other creed is not tolerated (even alongside the "Aliens As Communists'" creed, often on pain of death). Heavy emphasis on assimilation, which can either be literal (with them wanting to transmogrify humans into more of their own), or allegorical (e.g. brainwashing or body-snatching). The Virus may fall into this category.

"Your destruction is the will of the gods... and we are their instrument."
— Covenant Elite, Halo: Combat Evolved trailernote and later, the Prophet of Truth in Halo 3 (with "I am" replacing "we are").

The most recent evolution of the trope yet and, pound-for-pound, the most frequently used. It's a step forward that Speculative Fiction can now depict alien religion as extending beyond "advanced = atheistic; primitive = any belief in the supernatural at all, and fooled into worshiping anyone with a PDA," but there's also a step backward in that the new category of alien religion is more often than not just a reference or allegory of any and all real-life expressions of faith or religious beliefs the author dislikes. This is two sides of the same coin, the focus going from "promoting atheism" to "lampooning religion". The Alien as Religious Fundamentalists hates humans because their god/gods told them to.

For maximum points, it should be possible, even likely, that if the alien god does exist, it really isn't averse to humans at all, but is being misrepresented by the alien leadership. To really stick a fork in it, it occasionally turns out that humans are supposed to be the aliens' "true" gods, according to the correct interpretation of their religion or maybe even humans and aliens have the same god. Interestingly, the "Alien as Religious Fundamentalists" types are also the most likely type to be redeemed as individuals or a group.

"We are Klingons, Worf! We do not embrace other cultures, we conquer them!"
— Martok, Star Trek: Deep Space Nine

The oldest form of this trope (dating back to H.G. Wells' The War of the Worlds), but generally quite similar to aliens as Nazis, roaming the cosmos in search of new lands to subjugate and new prizes to claim in the name of the Empire or for their own personal glory. Your subjugation will occasionally be in order to civilize you, but more often will be because Might Makes Right, and those too weak to make a stand don't deserve a say in their own fates. An Alien as Conquistador is likely to be a Proud Warrior Race Guy. Can mix easily with other types.

The entire "suddenly, vastly technologically superior anthropomorphic aliens landed and life as we knew it forever went to hell in a handbasket" seems to be so everlastingly popular in America due to its own history being just that, except that the invading aliens, not the unfortunate current residents, carried the day. For much the same reason, Japanese anime's aliens have an army of Monsters of the Week and practice gunboat diplomacy by packing the power to flatten entire cities in one go, while Russian scifi tends to focus on exploring and colonizing incomprehensible, faintly oriental, and technologically backward aliens, and not vice versa. Every culture's colonization-related alien stories reflect its own historical experiences, whether in wishing to repeat past achievements, recalling past humiliations and horrors in fear of the old adage that history repeats itself, or in apprehension that "do unto others..." promises a long-overdue Karmic backlash any day now.

"The alien is not intrinsically evil. Do not hate him. Pity his ignorance. Seek to understand his differences and acquaint him with his inadequacies. Only then will he accept his place in the Greater Good."
—Shas'O O'Mau'tel, Tau Empire, Warhammer 40,000

Aliens with an obvious dogma that don't quite fit into any of the above categories, or that fit into more than one.