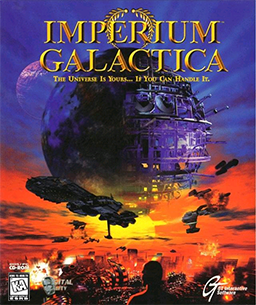 Imperium Galactica is a series of real-time 4X games developed by the Hungarian developer Digital Reality. Only two games were released (Imperium Galactica in 1997 and Imperium Galactica II: Alliances in 1999), although a third game (Imperium Galactica III: Genesis) was also planned. Unfortunately, the publisher GT Interactive went bankrupt, and the game got stuck in Development Hell before Philos Laboratories purchased the title. Unable to publish before the lease expired, they renamed the project Galaxy Andromeda but then also went bankrupt. Finally, Mithis Entertainment picked up the project and finished it under the name Nexus: The Jupiter Incident, leaving the storyline largely intact, making Nexus the unofficial prequel to the Imperium Galactica series despite a vastly different gameplay.
Advertisement:

In IG, the player takes control of an interstellar empire on a 2D map. The game has multiple views: galactic, planetary, space battle. The main view is galactic, showing the explored space from the "top" with stars, planets, and fleets. Planetary view allows player to manage colonies by purchasing various buildings (e.g. residences, power plants, hospitals, factories) to improve them. Invasions are also played out in this view. Fleets consist of capital ships and fighters. Only flagships can carry invasion forces (made up of various tanks and support vehicles). Flagships are also the most powerful ships in the fleet. The player also manages research, diplomacy, taxes, and spies. Like the main screen, all battles (both space and ground) are in real-time. When encountering an enemy fleet, the game switches to the space battle view. Depending on the number of ships, they may show up individually or in groups. The player can order ships to move and fire. Invasions involve the attacker landing tanks to take out the defending tanks and any ground-based defenses.

The single-player campaign takes place in the 3200s and involves the Player Character Dante Johnson of the Galactic Empire being given command of a destroyer and three fighters to start, as well as three colonies. As the storyline plays out, the player's rank increases from Lieutenant all the way to Grand Admiral. Each rank unlocks more features and a larger map. The galaxy is full of both alien races and factions that broke off from the Empire. The main antagonist in the campaign is the Dargslan Kingdom. If the player takes too long to complete the "training" missions, he/she may find the galaxy already in Dargslan hands when the main portion is unlocked.

The sequel has improved graphics and three campaigns. However, none of the factions of the first game make it into the sequel. Additionally, space combat has been radically altered: fighters are no longer under direct control and are, instead, subject only to the "attack-defend" behavior slider. Tactics also matter much less here as opposed to numbers and firepower. Flagships have been removed, and any capital ship may carry a certain number of tanks. Also, unlike the first game, fighters are now able to form their own fleets and travel between stars, albeit at the minimum speed. Placing trading ports on planets allows the purchase and sale of alien ships and tanks. The three main factions in the game are the Solarian Federation (which appears to be the successor to the Galactic Empire), the Shinari Republic (a race of master spies and traders), and the Kra'hen Empire (a vicious extragalactic race known to collect heads of their fallen enemies; incapable of espionage or trade but also can't be spied upon). Many of the other races are, eventually, revealed to be Transplanted Humans, whose physiology was altered to survive on their colonies and who, eventually, broke away from humanity.