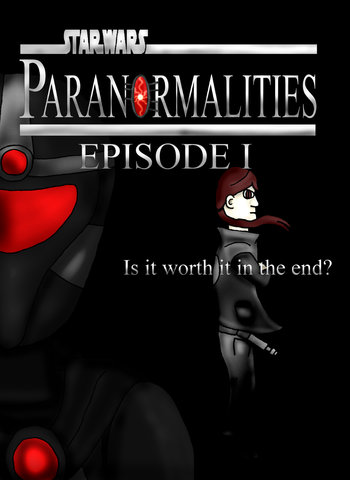 A Star Wars fanfiction written by Matt "Gahmah Raan" Mosher (not to be confused with a character in-story of the same name; he actually chose the alias after him).

Shortly after the end of the war with the Yuuzhan Vong, the Galactic Alliance is struggling to rebuild the galaxy after all the damage the alien invaders had done. Now they are at war with a group known as the Valkoran Empire. Starting with a terrorist attack on the rebuilding planet Ithor, Jedi Knight Zolph Vaelor is already familiar with this group after an attack by them five years prior that left him orphaned. However, this group has a more dangerous goal in mind: the summoning of several ancient creatures — part of a group known as the Forceless Collective — that could bring an even darker age to the galaxy than the Vong did.

This series started not as a fanfiction, but a series of concept art that began in 2006. It wasn't until early 2012 that Gahmah decided to actually write it as a full-out story. This in-progress trilogy features a main cast made mostly of original characters and concepts. Such characters include — but are not limited to — the protagonist Zolph Vaelor, a Jedi Knight who has put up with the weirder aspects of the universe he lives in; Maesterus — a Force user, one of the Valkoran leaders and most prominent antagonist in Episode I; and the Forceless Collective — a group of bizarre creatures that go against the nature of The Force and a much bigger threat than the Valkoran. As light-hearted as this series is — especially with aspects like a certain character who dies repeatedly as a Running Gag, an eccentric bounty hunter, a sadistic astromech droid, and its awareness of the general tropes of fiction and Star Wars universe — it's not afraid to get really dark at times, especially when the Collective gets involved.

After the Legends decision that rebooted the Expanded Universe in April 2014, Gahmah has decided to have this story embrace itself as a legend and have some older stories be legends In-Universe as well (for example, some of those stories didn't exactly happen as they were portrayed).

So far, Episode I and II have been completed, with Episode III in progress. It can be found on DeviantArt

(where you can also find some of Gahmah's concept art for the trilogy, as well as cover art for individual chapters), FanFiction.net

, and the Jedi Council Forums