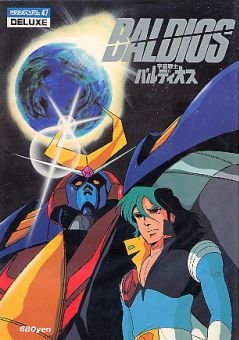 A 1980 Super Robot series by Ashi Productions, followed up by a 1981 movie produced by Ashi and distributed by Toei Company.

In 2100, A distant planet called S-1 is contaminated by deadly radiation. The planet's Emperor is given two options: The scientists wish to develop technology to clean up the radiation and save their world, but the military commander Zeo Gattler would rather invade and colonize a nearby, cleaner planet they've discovered(guess which one). Too impatient with the king's decision of an already short ultimatum to give the scientists time to finish their tech, Gattler assasinates the Emperor and takes over as dictator.

Our hero, Marin, is the son of the planet's head scientist. Unfortunately, before he can do anything about the people trying to overthrow the evironmentalists' hard work at restoration, he is sucked into a wormhole and ends up near Earth. There, he uses his ship to form part of the mighty mecha, Baldios, and joins the rebel military team called the Blue Fixers.