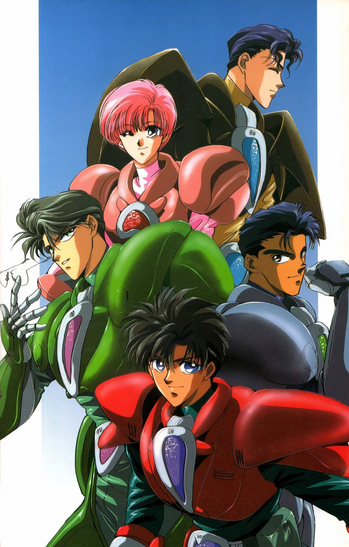 Aliens have invaded Earth. The King of Planet Voice has sent his son, Prince Sasaki, and his chief tactician, Seki, to Earth, disguised as an ordinary Japanese businessman, with the intent of turning Mega-Corp Science Electronics into a power strong enough to Take Over the World. Fortunately, they are opposed in this goal by a secret department of the Right Trading Company - the Special Duty Combat Unit Shinesman!

The series chronicles the adventures of young Salaryman Hiroya Matsumoto, Shinesman Red, and his co-workers, who form a team of five. They fight the aliens of Planet Voice with highly impractical weapons and the support of the Right Trading Company's Human Resources Department.

Shinesman is an Affectionate Parody of the Sentai genre, originally created as a manga by Kaimu Tachibana, and then adapted as an OVA by Production I.G, which ran for precisely two episodes. A very high-quality English dub was released by Media Blasters, under their Anime Works label.