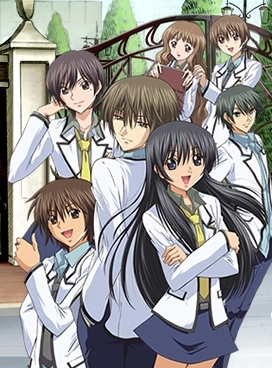 Special A is a Shoujo manga by Maki Minami about Hikari Hanazono, a girl with a mission. That mission? To beat her rival, Kei Takishima, in something. Anything. It started when he beat her in wrestling (their fathers both being huge pro wrestling fans) at the age of 6, and it's continued ever since. She's so driven that she even begs her father, a mere carpenter, to let her attend the prestigious Hakusen Academy, for this chance. She even manages to rise to the second rank in the school, placing her in the most elite class division - Special A, reserved only for the top seven students in the entire academy.

The part that drives her up the wall? Kei still manages to top her, rising to number one and always able to best her using his natural talent.

Which isn't to say it's all fun and games for Kei at the top of the heap. See, it's bleedingly obvious to everyone that Kei is in love with Hikari. But she's so focused on their rivalry that she totally overlooks it. So he keeps up his half of the rivalry, hoping that she'll eventually see his feelings and return them.

Special A was serialized in Hana to Yume from 2003 to 2009. It received an anime adaptation in 2008 which aired for 24 episodes, animated by Gonzo and AIC. Sentai Filmworks licensed it for an American release in 2009, and its rerelease in July 2013 includes a dub.