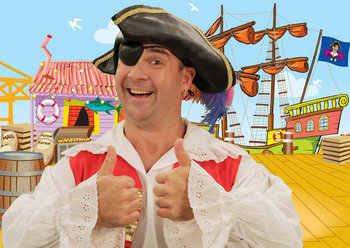 "Ahoy there, me hearties! I'm Captain Feathersword, the Friendly Pirate!"
Zoro: Pirates are scum! Who would want to be one?
Luffy: Does it matter? You're known as an evil pirate hunter.
— One Piece
Advertisement:

Pirates are traditionally savage outlaws who reside in the seas. Expect them to Rape, Pillage, and Burn, and consider yourself lucky to survive encountering one. However, due to the popularity of the Stock Character, a different interpretation has emerged in fiction: a pirate who is nice. Meet the Friendly Pirate, a pirate who has no intention of harming others they encounter. They will often adopt many of the traditional pirate mannerisms such as being Dressed to Plunder (Eye Patch Of Power optional), having a Cool Ship, and seeking out treasure. However, any behavior that makes a pirate traditionally dangerous, is virtually absent.

Being friendly allows the possibility of having a pirate in a heroic role, either as the main cast or as an ally of the hero. Some variants may also have a pirate start off as traditionally savage, but they experience a Heel–Face Turn at some stage and transition to this trope. Some pirates choose to remain Lovable Rogues who bend the law, but otherwise are firmly Affably Evil and of no harm to innocent people. At times the Friendly Pirate may even be pitted against the more standard 'evil pirate'.

Of course the concept of a Friendly Pirate would be (in most cases) very bizarre in reality. Piracy is defined by the act of robbery or criminal violence by ships or boats. So if they aren't breaking any laws then why are they considered a pirate at all? It appears that in spite of the fact they are no different from any legal sailor, the commitment to the roleplay is enough for them to be deemed a pirate.

Alternately, they may be a form of Karmic Thief or Just Like Robin Hood, dabbling in stealing and plundering but only from evil people who really deserve it. Either way they certainly won't engage in any violence more lethal than the obligatory swashbuckling, at worst subjecting their opponents to a Humiliation Conga. When a Friendly Pirate makes someone Walk the Plank, it's to laugh at them for getting their clothes wet.

Related to but distinct from The Pirates Who Don't Do Anything, as Friendly Pirates can still be fairly active in their piracy, but tend to stick to the less dangerous activities. Even when they do engage in violence and plundering, they may get around the moral issues of their profession by only raiding The Empire, with or without a Privateer license from a "good"-aligned policy.

Compare Hooker with a Heart of Gold, Hitman with a Heart, Friendly Sniper, and Neighborhood-Friendly Gangsters for other types who are friendly despite their professions.