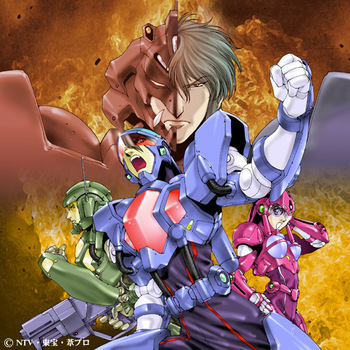 Pictured, in the back: Dust Gead, Left: Chuck Sweager, Middle: Ryo Hibiki, Right: Anice Farm
"BORG GET ON!!!"
— The Borgmen before their Transformation Sequence
Advertisement:

In the year 1999, four meteorites suddenly crashed in Tokyo and completely destroyed the city.

In the year of 2030, people built up a new city Megalo City beside the ruins of Tokyo. However, the evil squad led by Dr. Gilbert Mesh started to attack the new city. Memory Gene, the principal of the Cybersonic Institute had anticipated such attack beforehand and as such hires three young cyborg warriors; Ryo Hibiki, Chuck Sweager, and Anice Farm, protects the city using the Baltechtors and the Sonic System developed by Memory. This was the beginning of the Borgmen.

The series is also notable for its character designs by Kia Asamiya, and Koichi Ohata did some design work for it as well

Should in no way be confused with the 2013 movie, Borgman, which is something entirely different.

Also has a character sheet

that's a work in progress

The order of the series is as follows:

The following tropes seen in Borgman are: