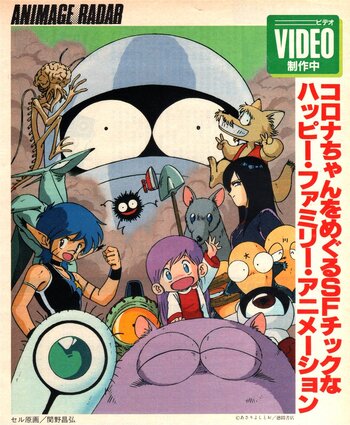 In the year 4001 a troupe of alien actors are traveling on their spaceship, when suddenly another vessel warps in front of them and crashes on a nearby planet. They go to the rescue, but the only survivor on board is an infant human; despite knowing nothing about humans, they decide to adopt the baby and name her Corona. In the meantime they are constantly sending a signal into outer space, hoping that her nearest living relatives can come and pick her up; until then, they will raise her as her human parents would. Hilarity and cuteness ensue.

Space Family Carlvinson is a 1988 Sci-fi/comedy/Slice of Life OAV based on the manga by Yoshitoo Asari serialized in Shonen Captain from 1985 to 1997. It was Dogakobo's earliest work (they didn't make anything else until 2005) and it never led to a proper series or another adaptation of the original manga. A quite obscure work that was never released outside Japan, it can nevertheless be found on YouTube with fan-made subtitles.

This OAV provides examples of: