Music / Back in Black 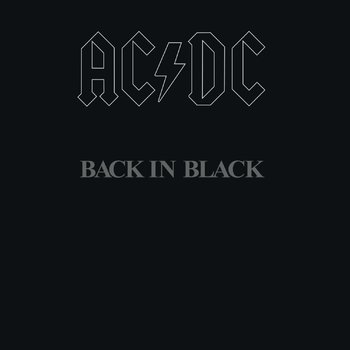 Back in the back of a Cadillac
Number one with a bullet, I'm a power pack!
I'm a rolling thunder, pouring rain
I'm coming on like a hurricane
My lightning's flashing across the sky
You're only young, but you're gonna die
I won't take no prisoners, won't spare no lives
Nobody's putting up a fight
I got my bell, I'm gonna take you to hell
I'm gonna get ya, Satan, get ya
— "Hells Bells"
Advertisement:

Back in Black is the seventh studio album recorded by Australian heavy metal band AC/DC; their first album with lead singer Brian Johnson following the death of original lead Bon Scott. It was released in Australia through Albert Recordings, and globally through Atlantic Records, on 25 July 1980.

The band had been riding a wave of popularity after the success of their most recent 1979 album, Highway to Hell. Unfortunately, lead vocalist Bon Scott's life of excess caught up to him after a night of drinking in London, when he was found dead in the back seat of his friend's car. At first, the band was unable to keep going, but since they had some material they'd already written, they decided to find a new singer. He was Brian Johnson, a Geordie who Scott had seen before and been impressed by.

Long story short, calling Back in Black merely the band's best-selling album is a gross understatement. It has become the third-biggest selling album of all time, after Thriller by Michael Jackson and Their Greatest Hits (1971-1975) by the Eagles. Currently, it is certified double-Diamond (25-times Platinum) by the RIAA. It also went 12-times Platinum in Australia, Diamond in Canada, and double-Platinum in the United Kingdom.

Music videos were produced for all four singles, as well as for "Let Me Put My Love into You" and "What Do You Do for Money Honey".

Not to be mistaken with Back to Black by Amy Winehouse.

You troped me all night long: